Pricing & Negotiating: A Corporate Lifestyle Project With an Expanding Scope

Licensing: Collateral use of 30 images in perpetuity

Agency: Mid-sized, based in the Midwest 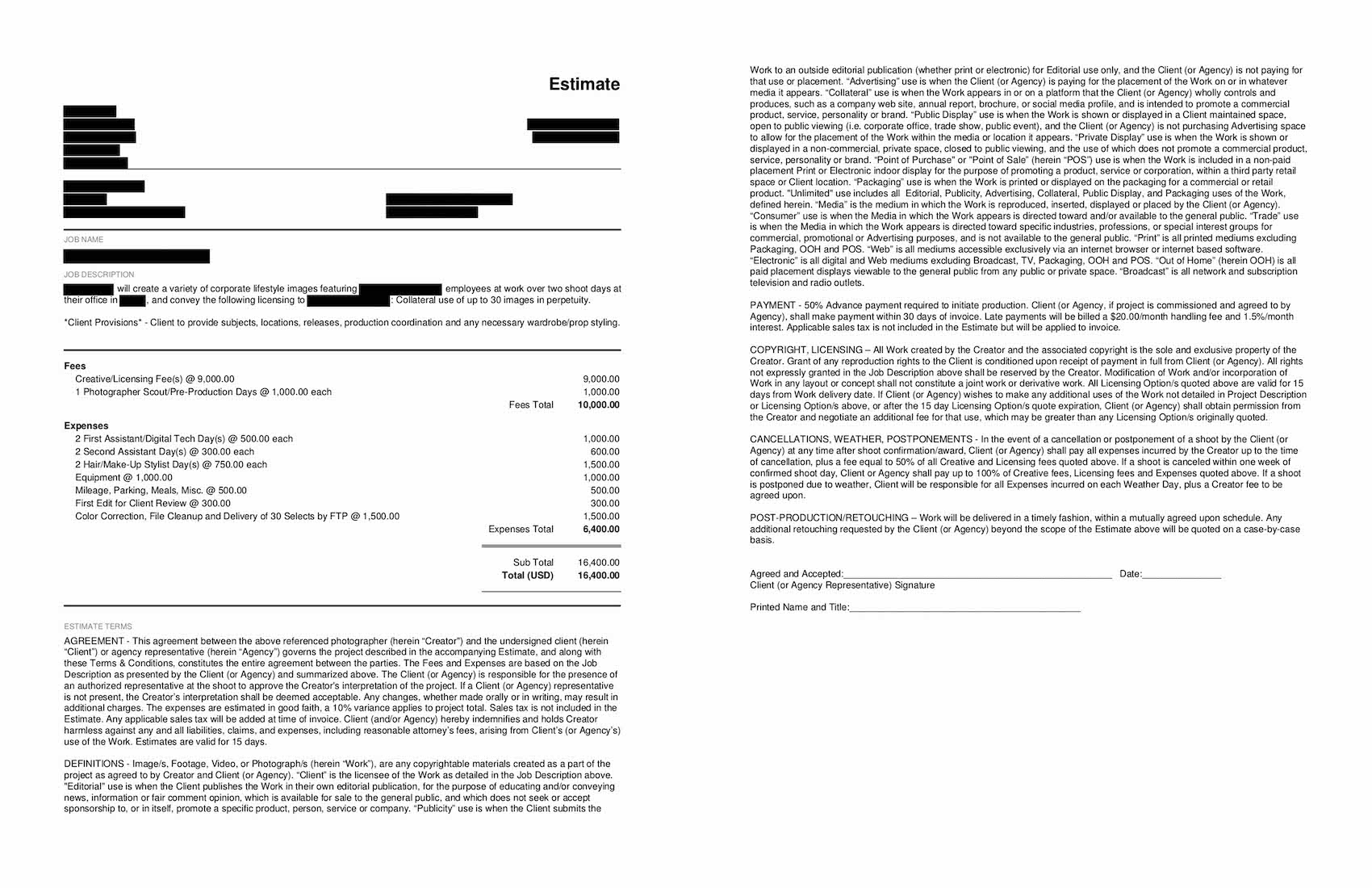 Creative/Licensing Fees: The project started like many others I’ve seen. A law firm needed corporate lifestyle images of their employees at work within their offices. Based on the brief we received, we decided that two shoot days would be necessary to check off all the boxes and to make sure that all the key employees were available to participate. They hoped to license 30 final images, primarily for use on their website and for other collateral purposes. Based on my experience on other similar projects, I anticipated that a fee somewhere between 4-5k/day, or a few hundred dollars per image would be appropriate, despite the perpetual duration requested. I decided to include $4,500/day, or $300/image, to arrive at a creative/licensing fee of $9,000.

Scout/Pre-Production Days: I included $1,000 to account for the photographer’s time to look at the location prior to the shoot, and discuss the project with the agency/client.

Assistants: We wanted to keep a relatively small footprint, and we included one assistant who would play double duty as a digital tech, as well as a second assistant to lend an extra pair of hands for both shoot days.

Hair/Makeup Stylist: We anticipated the need for light hair/makeup styling, and included a stylist for both days.

Equipment: This included the photographer’s camera, grip, and lighting equipment for both days.

Mileage, Parking, Meals, Misc.: We anticipated $35 per person per day for the crew for meals, and included approximately $100/day for mileage, parking, and unforeseen expenses that might arise.

First Edit for Client Review: This included the photographer’s time to do an initial edit through everything captured, and provide a gallery of content for the client to review.

Color Correction, File Cleanup, and Delivery of 30 Selects by FTP: We based this on $50/image for the light post-production that the photographer would perform on the selected images.

Feedback: The agency was receptive to the fees/expenses and told us that there was a chance this project could potentially grow in scope, but they needed to continue the conversation with their client. About two months later, they finally got back in touch to inform us that they wanted to expand the project to include five cities. Additionally, rather than corporate lifestyle images, the creative scope shifted to focus more on environmental portraits of individual employees, and there were 353 employees collectively in each of the five different cities/offices. While it wasn’t completely dialed in, we acquired a rough breakdown of approximately how many people were in each office and developed a plan for ten shoot days. Five days would be at a location local to the photographer, and the rest of the shoot days would be at a mix of locations, a few of which required a bit of travel.

Here was the revised estimate we sent (click to enlarge): 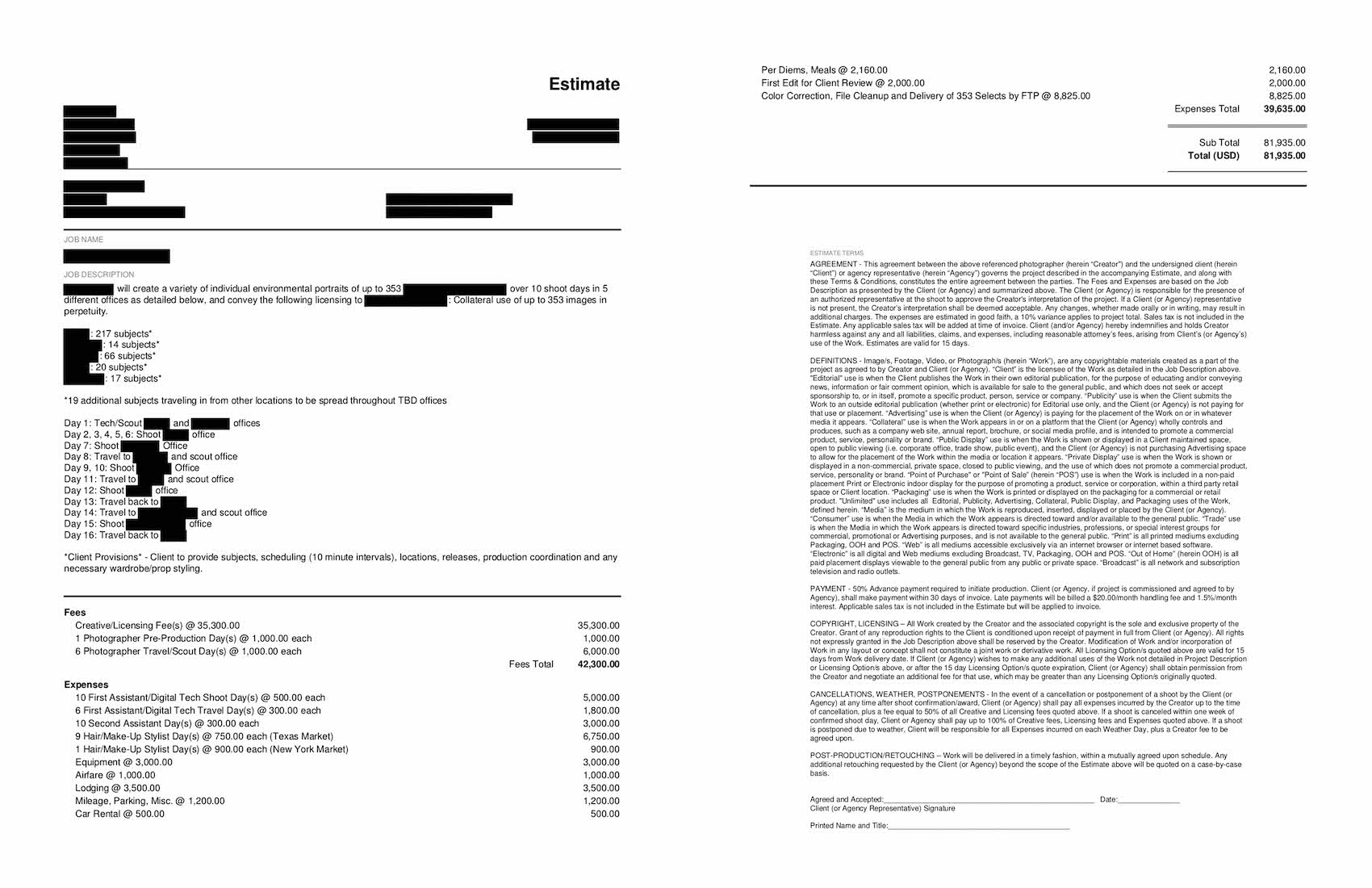 We included a breakdown of subjects in each city along with an itinerary to ensure we were on the same page with the agency regarding the approach for the project. Since the scope changed to individual portraits, I thought that each image might be a bit less valuable than evergreen corporate lifestyle shots, and there was less of a chance they’d use a portrait of a lower-level employee as the face of any larger marketing campaigns. I decided to go with $100/image totaling $35,300, which also broke down to just over $3,500/day, and I felt this was reasonable given the additional fees the photographer would make for their travel days, equipment and post-production time.

For the crew, I broke out separate prices for travel days and shoot days for the first assistant/digital tech, who would be traveling with the photographer. We anticipated hiring local second assistants in each market, and while the plan was the same for the hair/makeup stylist, we included a slightly higher rate for them for a shoot in a larger market that would demand a higher fee for such a role. We kept equipment charges modest compared to the first estimate since the photographer owned his gear, and used Kayak.com to estimate travel expenses. For post-production, we brought the per image fee down from $50 to $25 for the color correction and file cleanup.

After reviewing the estimate, the agency let us know that they wanted to add back in the corporate lifestyle shots, along with some group photos of staff and detail shots of the office environments as well. However, they only wanted to do this at their headquarters where most of their staff was, and focus solely on the individual portraits at the other locations. We submitted the following revised estimate: 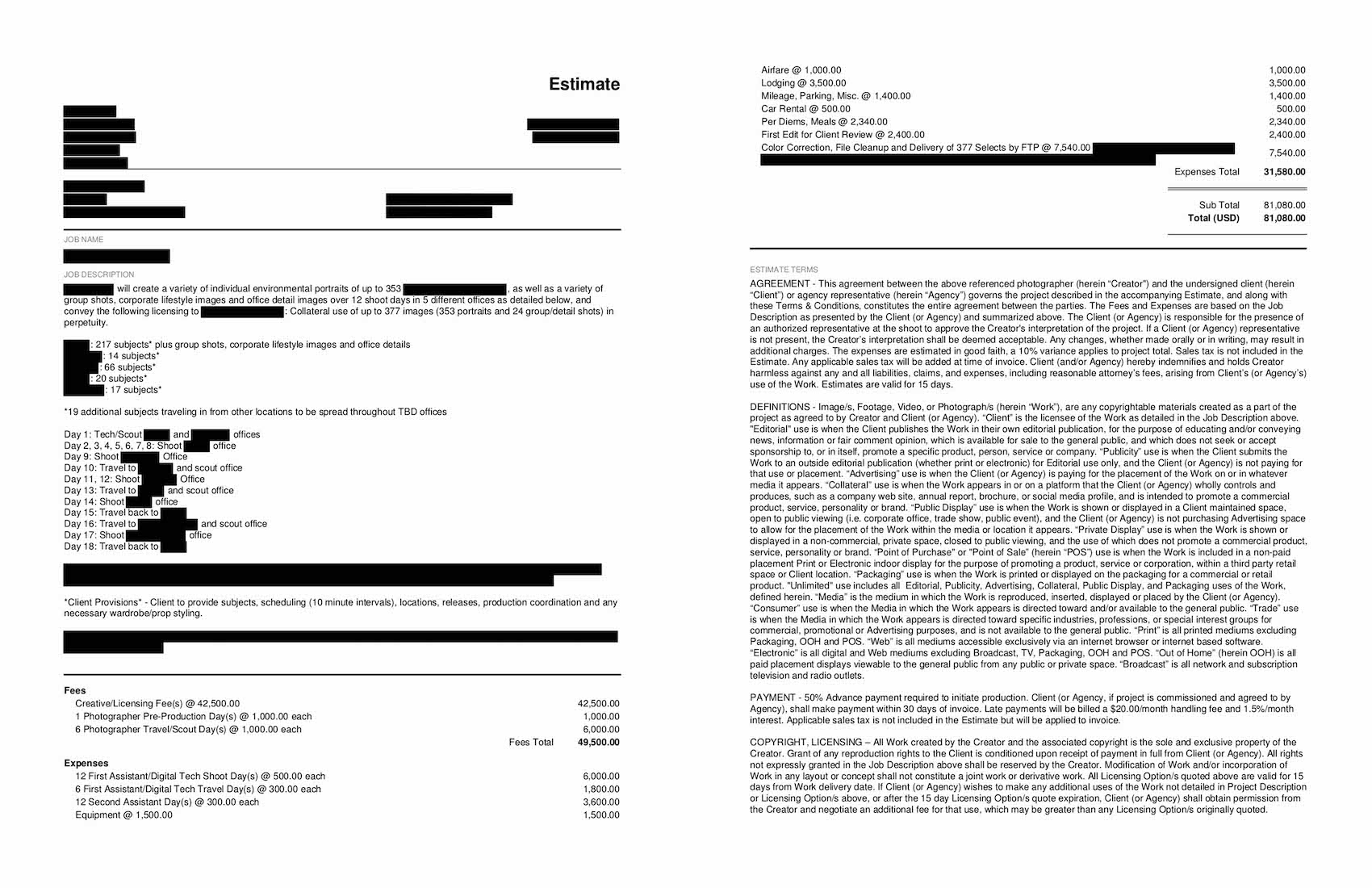 In order to accomplish the new project scope, we felt that we would need two additional days at their headquarters, which was the location local to the photographer. Additionally, we needed to account for 24 additional images. While I discussed pushing the fee higher with the photographer, I also wanted to stick around the $3,500/day mark even though I felt the value of these additional 24 images was higher than the individual headshots. We also wanted to include a slight discount in return for a commitment to hiring the photographer for so many days. Ultimately, we landed on $42,500 as a creative/licensing fee, which was based on a candid conversation with our agency contact on what would be palatable to the client.

Additionally, we were asked to remove the hair/makeup styling, and were informed that they had hoped for us to stay around an 80k bottom line. We removed the styling, dropped equipment down a bit, and came down even further on the post-production on a per-image basis (while still including what we felt was appropriate overall for the time dedicated to retouching).

The project was awarded, and the shoot went off without a hitch.