Pricing & Negotiating: A Mash-Up of Product and Architectural Photography

I recently helped one of our photographers estimate, negotiate and produce an architectural interior/product shoot. The client was a high-end furniture manufacturer in the northeastern U.S. working with a mid-sized ad agency in the southeastern U.S. The project was to create a series of ads showing entertainment centers in beautiful residential settings.

Though this project has a lot in common with many routine architectural interior assignments, it ended up being worth much more. Most architectural assignments come from architecture firms, builders, or building owners, rather than ad agencies. Even though pictures from those assignments sometimes get used for advertising, the primary use is typically for brochures, web sites, publicity, portfolios and contests. It’s fairly customary for architectural photographers to charge a day rate (often around 2000.00 – 3500.00, depending on how much the photographer is in demand) plus expenses (capture fee, file prep, equipment fee, assistants and travel), for up to about five pictures. Architectural photographers can also often bump up this fee by licensing the pictures to related clients for the same property (like the architect, builder and owner).

This job was different because it was specifically shot for advertising use, it was a product picture more than an architectural interior, it required a fairly high degree of styling and other production, plus there were models and special retouching to boot.

The art director will explain the concept to the photographer (sometimes with sketches or swipe art). Then it’s up to the photographer (along with some input from me) to figure out the most effective approach. In this case, the job was to show entertainment centers in a beautiful home. The photographer had to decide whether it made more sense to build a set in a studio, or to work on location. This will depend on their past experience, comfort level, and of course factoring in time considerations and cost, in addition to how it will affect the look of the picture. In this case, we proposed to shoot the job on location.

Another important creative aspect of this shoot was going to be the room styling. You can be the best photographer in the world, but if you don’t have anything to photograph, you’re sunk. And while there are many photographers who shoot interiors that are already styled in advance, a project like this requires the photographer to help conceive and direct the room styling. And to do that requires  a working relationship with a stylist who is going to understand both the sensibilities of the photographer and know what’s appropriate for the client and their specific project. We were able to show the client that our photographer had a lot of experience collaborating with a very talented stylist, and this gave the client the confidence that we would deliver a high-quality product.

I’ve found that art buyers are often more comfortable talking money with an agent rather than directly with the photographer. That way, nobody’s taking anything personally. It’s just business. If they really want to work with that photographer (rather than just fishing for a price), they will often cut right to the chase and give the agent a good idea of what their price expectations are. That’s not to say that an agent should simply offer up the price the client wants. But it certainly saves a lot of back-and-forth for both parties when the photographer can scale the project appropriately.

There are times when a client either doesn’t have a particular budget, or they don’t want to say. If the client is inexperienced handling that type of project, the photographer/agent may simply have to work harder to understand what’s at stake in order to deliver a proposal that’s in proportion to the overall goals and wherewithal of that client. Sometimes, the client doesn’t want to say what their budget is because they might want to see several completely independent approaches that they can choose from. Again, in those cases, you’ll be forced to make an educated guess at the level of production the client might want. But regardless of the client’s price expectations, the actual picture requirements and the licensing needs will largely determine the value of the job. It’s also important to understand that the low bid does not always get the job. Sophisticated clients will be reluctant to work with photographers whose bids are “too good to be true.” Most good clients are looking for good value, not cheap prices. So pricing a project appropriately, and in proportion to all the specs, will give you the best chance of landing the job.

After getting the photographer’s thoughts on his creative approach to the project, I spoke with the art buyer. As is often the case with relatively small advertising projects, she was a little vague about the licensing she needed. After I explained that the price was going to be heavily influenced by those variables, she decided that she wanted a quote on Advertising, Publicity and Collateral in the U.S. for 2 years.

Still unknown, though, was the number of images they were going to need. It’s actually not that unusual to not have all the information you want when it comes time to construct an estimate. What’s very important to remember, though, is that even in cases where your client is vague, your quote will have to be specific. If the specs subsequently change, you can revise your quote accordingly. In this case, I chose to work up two versions of the estimate to show the cost for 4 pictures and the cost for 6. I offered a fairly deep discount on the last two pictures to give them an incentive to do more rather than less. 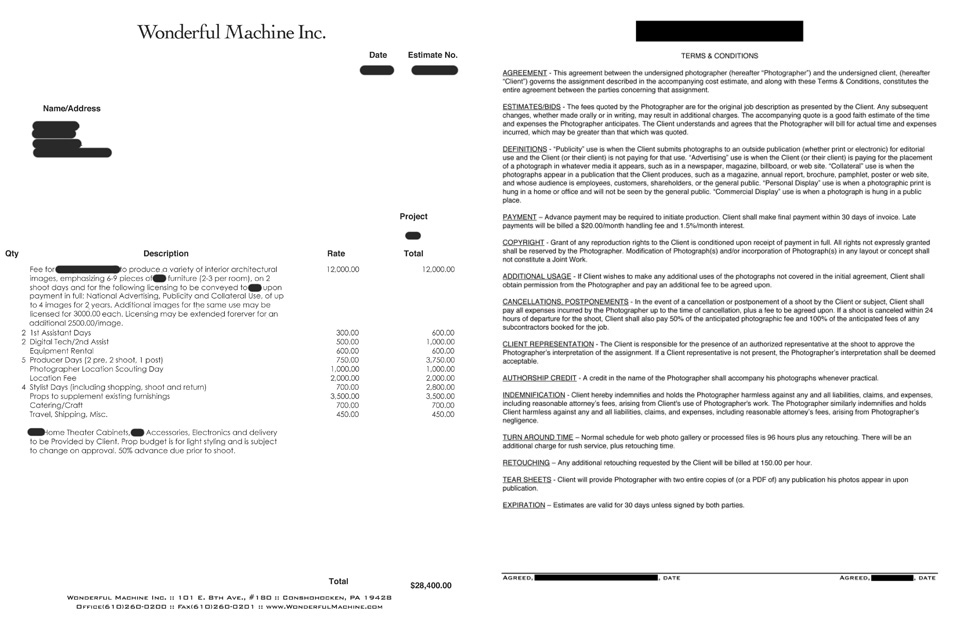 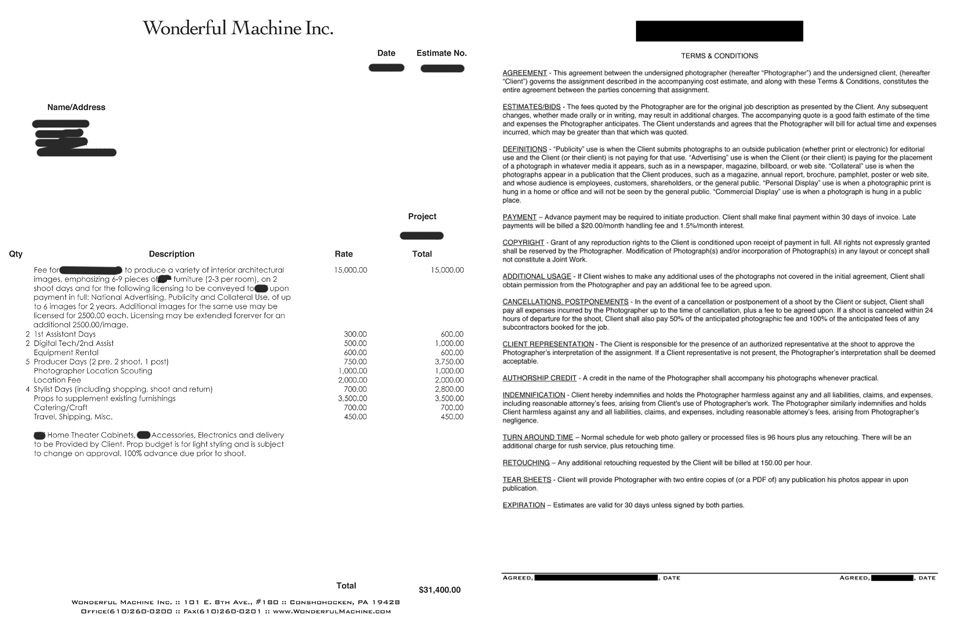 The client opted for the 6 image estimate.

After we received the signed estimate, the first thing we needed to do was find the locations. Prior to estimating, the client expressed an interest in shooting at two of the many beautiful homes in the photographer’s portfolio, one contemporary and one transitional (you have to learn your vocab when working with architectural clients: modern, transitional, traditional, contemporary). This made scouting a snap. The photographer pulled his files of the homes that fit the mold and presented them to the client. They were so enamored with one of the locations that they chose to shoot both days in the same home.

A nice benefit of shooting both days at the same location was that we’d need less setup time/breakdown time, and it gave us more time for pictures. The client decided that they’d like to add a seventh shot and try out a few variations of the others, including adding models. As I was working up the revised estimate, I decided to simply pro-rate the seventh shot, but I felt that the variations with the models were worth more than the others. The models changed the feel of the pictures significantly, and required another skill set from the photographer. Also, a whole different ad concept could be developed around these new model variations. As such, we felt they should be licensed independently of the original shots.

Also, the client inquired about several exterior stock images to retouch into the windows. The photographer had a stock library for just such occasions. For nominal fees he licenses exterior stock images to drop into windows, turning an ordinary residential bedroom with a view of the shed in the backyard into a hi-rise condo with a view of a metropolitan skyline at sunset.

So we worked up our final quote – adding in the models, the additional situation, and the exterior stock images: 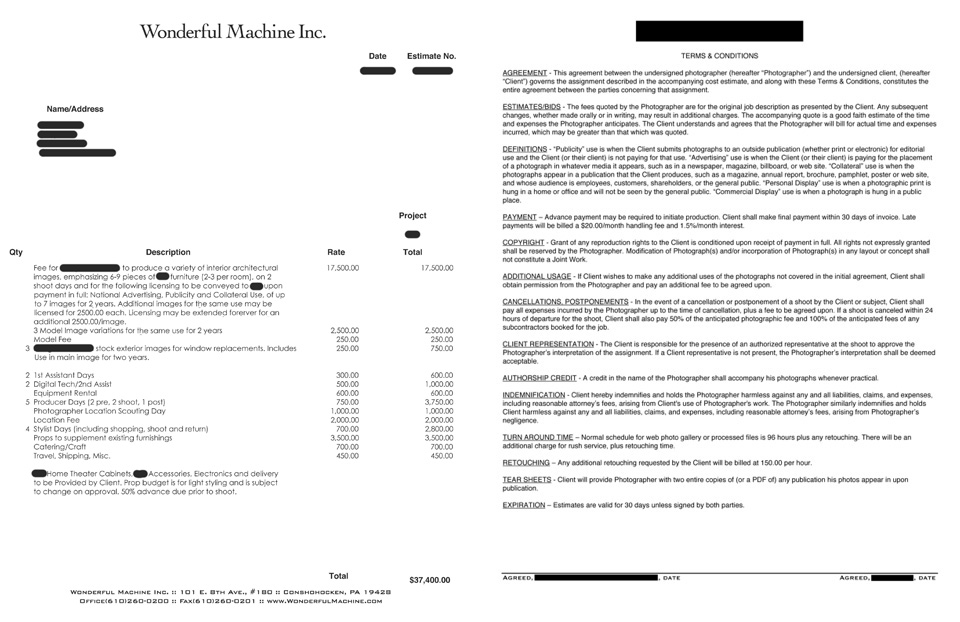 The client accepted that, so I sent over an invoice for a 50% advance (click to enlarge): 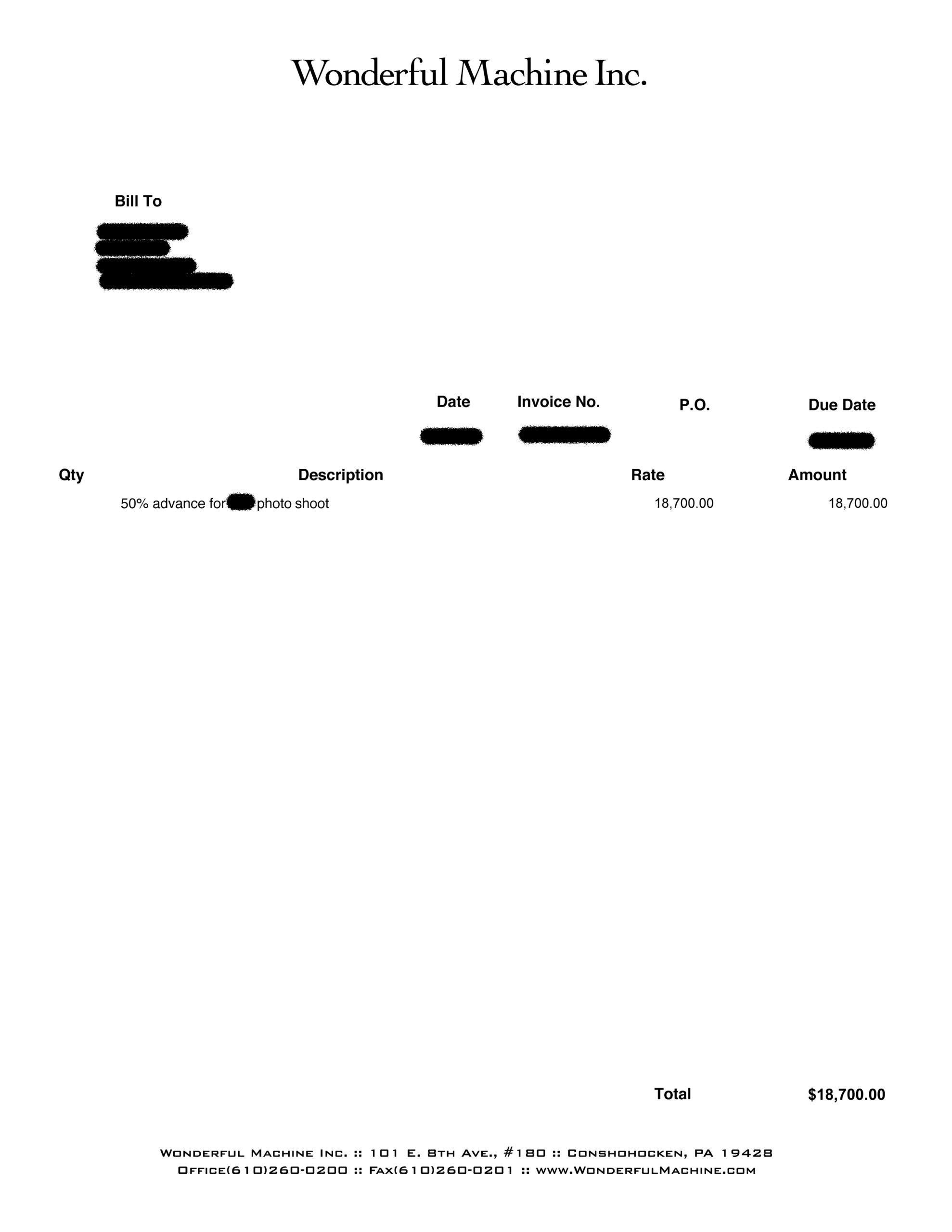 I coordinated the location. The homeowner agreed to our location fee and allowed us to store furniture and equipment overnight.

I collected location and model releases. It’s very important to get signed releases. Otherwise, the client will not be legally entitled to use the location and models’ likenesses to advertise their product. You don’t want to spend all that time and money producing a shoot only to later find out that the homeowner or model wasn’t clear on your intentions.

Coordinating with the stylist was the most time consuming portion of the production. The rental location gave us a great start, but we had to consider whether the existing carpet, paint colors, drapes, and props were appropriate, and what we needed to add or replace. We had many, many conversations between the stylist, photographer, and client to get all the details right.

Hiring, renting and managing the assistants, digital tech, equipment, caterer, and models was pretty straight-forward. Between the photographer and us, we have a long list of regular sub-contractors, and we also keep a thorough vendor database that we can use when we need to.

Though very hectic, the shoot went smoothly. Between all the shuffling furniture from room to lawn to room, moving around lights and digital cameras and workstations, art directing and shooting – there was never a dull moment. We squeezed in all 7 shots, no holes were punched in walls, and the client was very happy with the results.

Once back in the office, I began the tedious (but important) process of copying all of our receipts and organizing the invoice. We keep meticulous records of every expenditure so that everything is accounted for, everyone gets paid properly, and the client gets billed appropriately. Also, I try to present it in a way that makes it easy for the client to understand. I put copies of receipts in the order that the line item shows up on the invoice. And if a receipt isn’t self-explanatory, I indicate exactly what it’s for.

After a long day of scanning and collating, I sent over the final invoice (click to enlarge): 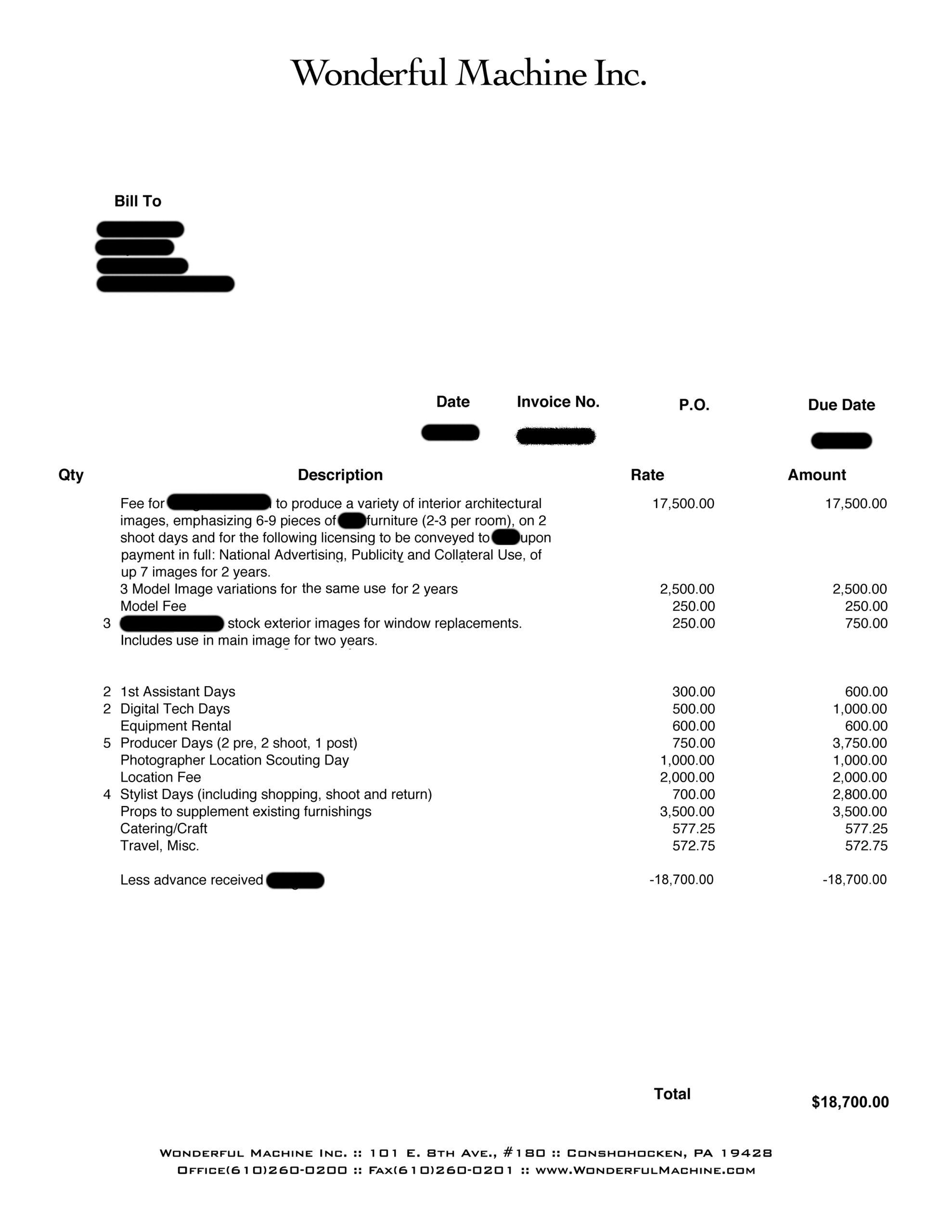