Licensing: Web Collateral and Web Advertising use of up to 56 images in perpetuity

Agency: Medium in size, based in the Northeast 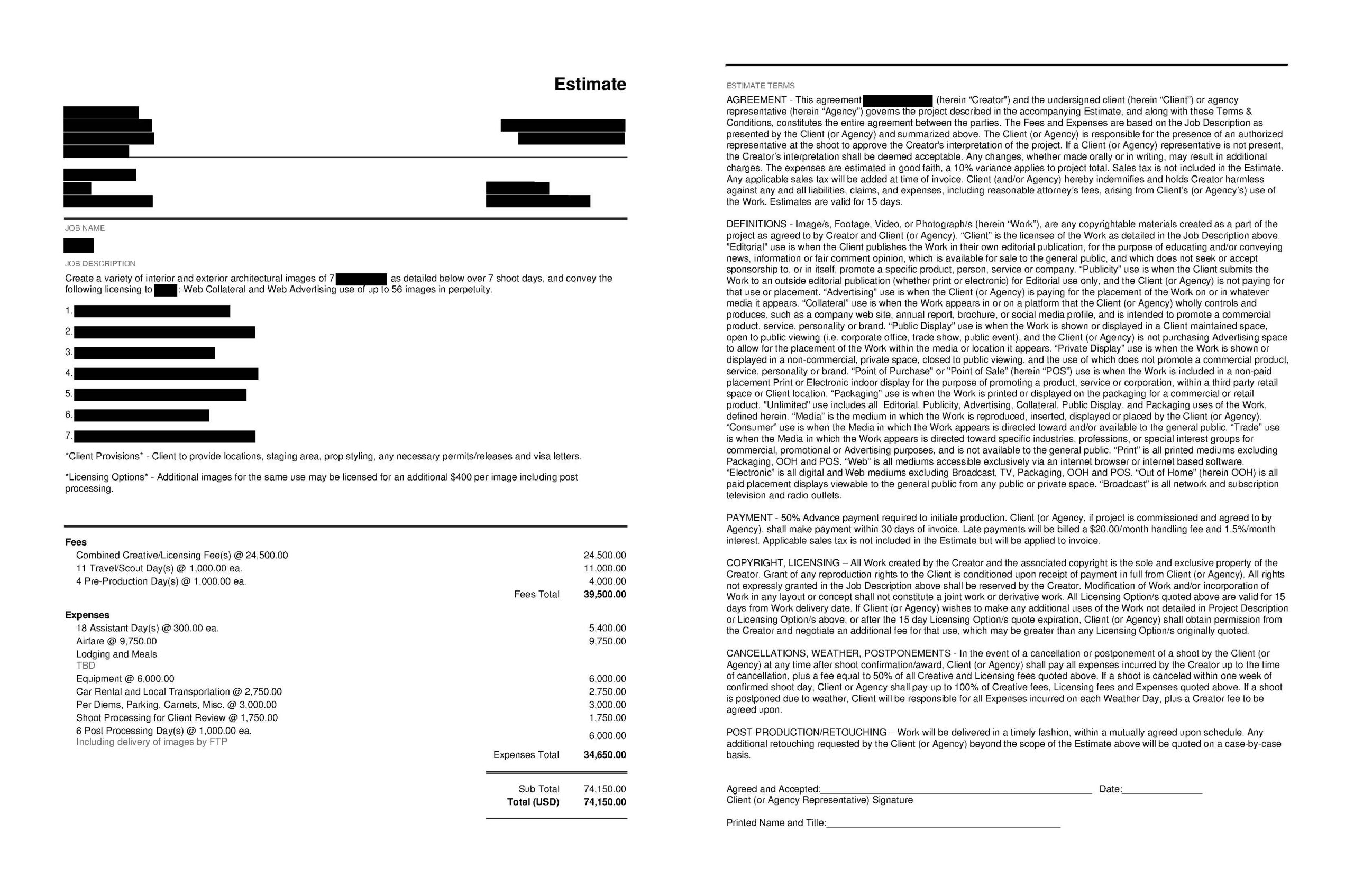 Creative/Licensing Fees: When the project first landed on my desk, it was similar to a lot of hospitality projects in that the brand wanted a mix of images showcasing everything their hotels have to offer. The creative brief initially encompassed architectural images, lifestyle shots, food, amenities, and more. In my experience, many agencies that propose similar shoots are typically biting off more than they can chew, and their budgets typically don’t align with reality. After learning more about the project and discussing what it would take to accomplish a production of that scale in multiple locations, I was ultimately happy to hear that they decided to focus the efforts of this particular project on just acquiring architectural images, and putting the lifestyle shots on hold. That being said, they had seven different properties, three of which were in foreign countries, and they had a very specific style of black and white photography that they hoped to achieve.

In discussing what was feasible in one shoot day, we landed on eight shots per hotel as a reasonable deliverable. They were willing to limit the usage to web advertising and web collateral use (mostly their website and social media), although they did request perpetual use. On one hand, I wanted to start around a few thousand dollars per image, however I also knew that the photographer would be up against other architectural photographers (both domestic and abroad), and we wanted to make it appealing for them to hire one photographer, rather than several. Additionally, it was likely that they’d use just one or two of the images in a more robust way on their website, and many of the shots would ultimately just fall to social media. While the parent company of the hotel chain was one of the largest in the industry, this particular hotel chain was a smaller brand in their portfolio, and I had a sense they might not have what we wanted in terms of a creative/licensing fee within their budget. Based on the photographer’s experience working with this agency for some of their other clients, and on my experience on similar projects with other brands, we landed on $24,500, which ultimately broke down to $3,500/hotel.

Travel/Scout Days: The first four shoots would be at hotels within the US, and we anticipated one travel/scout day prior to each shoot. We then anticipated a full travel day and a full scout day prior to each of the international locations (which helped to account for limited flights, travel delays and more extensive travel time), followed by one travel day back home.

Pre-Production Day(s): In addition to lining up all of the travel plans, the photographer would also need to communicate with each of the hotel chains and essentially plan seven different small productions, and this covered all of the time involved to handle that workload.

Assistant Days(s): The photographer would bring their assistant with them, rather than hiring locally, and this included 7 shoot days and 11 travel/scout days. While it would have been cheaper to hire local assistants and not include the expense for their travel, sourcing crew (especially internationally) would unnecessarily add to the photographer’s workload. Additionally, working and traveling with a single assistant who understood the project just as well as the photographer would help to streamline communications and execution.

Airfare: This covered one-way flights to/from each location, and I used Kayak.com to help research pricing. When estimating projects like this, I typically add 15% to the cost of a ticket to account for price fluctuation, and also add around $100 in baggage fees per person to account for equipment and oversized/overweight items.

Lodging and Meals: The agency specifically asked us to mark this as TBD and not include this in the bottom line of our estimate. We were comfortable doing so for the lodging since we assumed the hotels could provide accommodations, and while we anticipated that meals could be covered within the hotel property, we still included additional funds for supplemental meals while in transit in the per diem line items below.

Equipment: The photographer owned all the gear they would need to bring, and we based the charge on $1,000/day, factoring in a discount of 3 days equaling a weekly rental, times two weeks.

Per Diems, Parking, Carnets, Misc.: I included $50/day/person as a per diem, and anticipated at least another $1,000 would need to be spent on other miscellaneous expenses that would arise during the productions and while traveling.

Shoot Processing for Client Review: I included $250 per shoot for the photographer to do an initial pass on the images, and provide the agency with a gallery of images to consider.

Post Processing Day(s): I initially anticipated that we’d charge at least $100 per image, but it felt a little light, and I knew that it would take the photographer the better part of a week to handle the post for this shoot, so I included 6 post processing days, rather than basing it on a per image rate.

Results: We were asked to provide the client with the cost difference between this estimate and one where each of the domestic shoots would be independent trips, followed by a trip to capture the international locations consecutively. We determined it would add roughly $6,000 worth of travel expenses and additional travel days for the photographer and their assistant. The client opted to go with our initial proposal, and the photographer was awarded the project. As for lodging and meals, the client did end up providing accommodations and meals on-site.