Licensing: Unlimited use of all content captured in perpetuity

Agency: Large, based in the Northeast 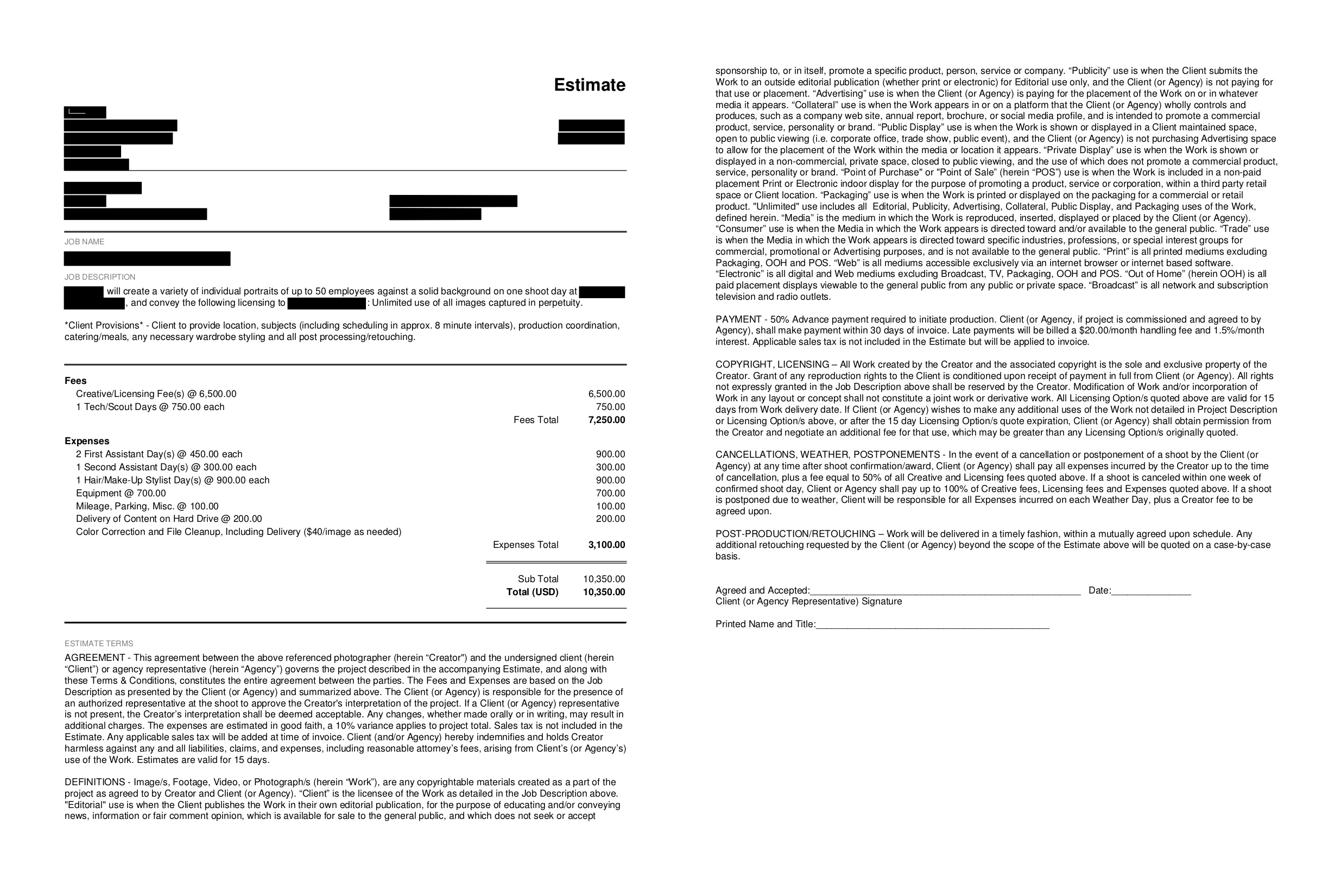 Creative/Licensing Fees: At first, the project seemed rather straightforward. The request was to capture about 50 employee headshots against a solid background on one shoot day. While 50 people would be a lot to cram into one day, the client was in charge of scheduling the employees, and we discussed spending just a few minutes with each subject, so it seemed doable. The client/agency also requested unlimited use of all images captured in perpetuity. In this case, the images would primarily be displayed on a website with no intention of advertising use. Nonetheless, we were told that we could not limit the licensing in any way. Unfortunately, we see this quite often, when a client’s requested use varies drastically from their intended use. While I always do my best to limit usage when I can, I knew the client could easily find a photographer willing to grant unlimited use on a project like this. Taking that potential competition into mind, the photographer was willing to throw it all in and trust that the usage would not escalate. I’ve quoted a lot of similar projects in the past, and I’ve had success starting with a fee of $1,500 and adding $100 per subject. In this case, that totaled $6,500.

Tech/Scout Day: The photographer planned to do a walkthrough of the location prior to the shoot to ensure that there would be adequate space, and to talk through the project with the client. We included $750 for their time to do so.

Hair/Makeup Stylist: We included one stylist to perform very light touchups of each subject prior to being photographed.

Equipment: This covered the cost of the photographer’s own equipment, including two camera bodies and the lighting and grip that he’d need for a basic setup.

Mileage, Parking, Misc.: The photographer was local, and this primarily covered parking and miscellaneous expenses that might pop up during the shoot day.

Delivery of Content on Hard Drive: Simply put, the photographer would provide the images on a hard drive to the client; this covered that expense.

Color Correction and File Cleanup: The agency planned to handle the retouching, as detailed in the job description, but asked for a cost to cover basic color correction and cleanup, should the photographer take on that task. We detailed a fee of $40/image for this if needed.

As we were compiling the above estimate, we were asked to also provide an estimate to add video. In addition to the 50 headshots, they hoped to capture short videos of 12 leadership team members. There would be no speaking (and therefore no audio capture needed) but rather minor expression changes and small movements captured in a very short clip. We felt this necessitated an additional day, so we compiled an estimate for a two-day shoot. Shooting over two days was actually advantageous as it would allow for more breathing room with the 50 portraits, and the ability to have them overflow on to the second day if needed, with half a day dedicated to the video. 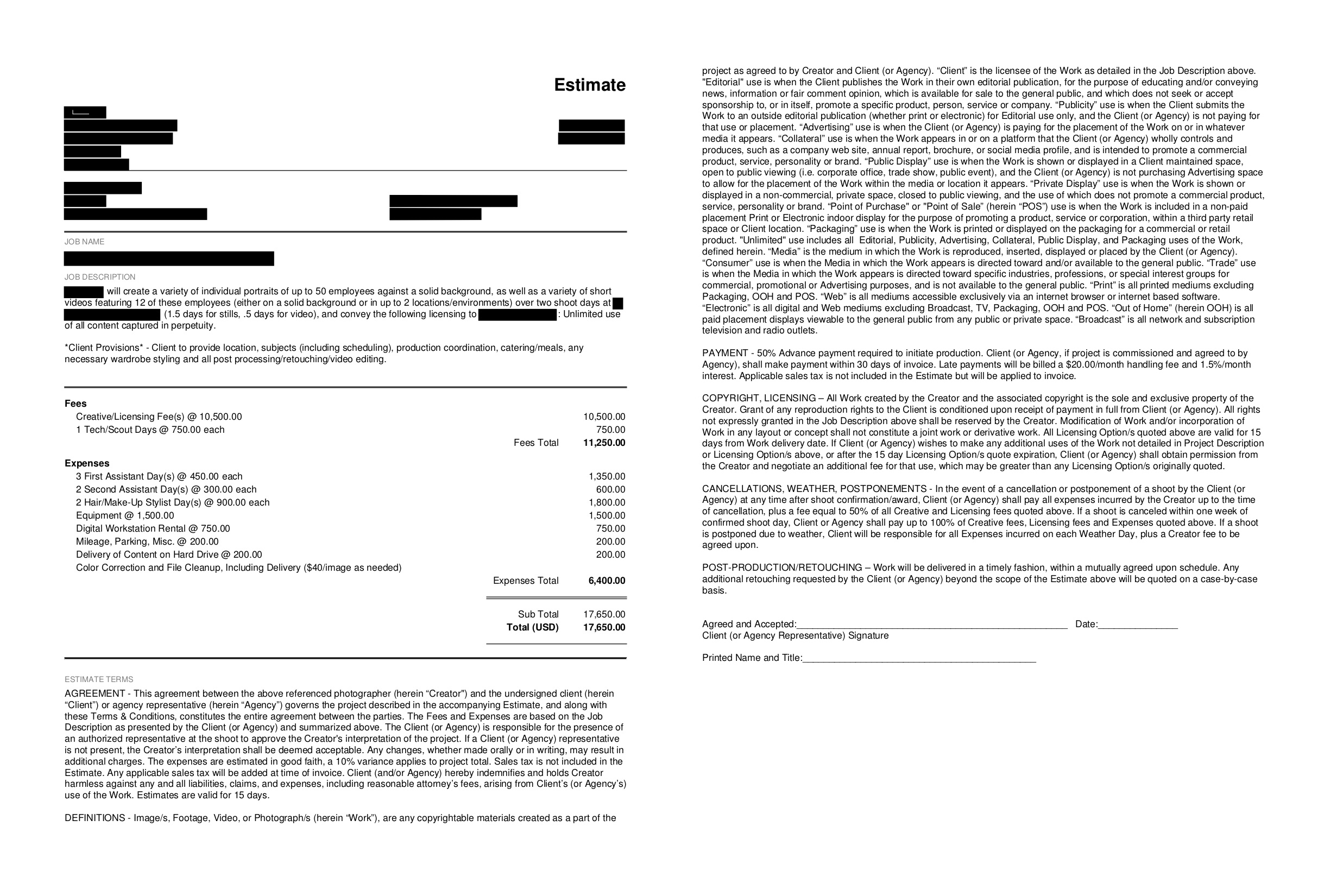 For the creative/licensing fee, I added $1,500 for a modest creative fee to account for the additional day, and then added $200 per person for the video, which brought me to $10,400, and I then rounded up to an even $10,500. We increased the crew to account for the additional day, and increased equipment as well to $1,500 to cover extra equipment that the photographer might need to rent for the video. We also added a digital workstation rental at $750 so the client could see the video that was being captured of their leadership team, and the photographer planned to have his first assistant jump in to play the role of a digital tech in this regard. We increase our mileage/parking/misc. line to account for the second day, and kept the expense the same for the delivery of a hard drive.

Feedback: After speaking with their client, the agency reported back and told us that rather than capturing headshots of 50 people, they wanted to focus primarily on the leadership team. They asked for a new estimate to capture individual portraits and short videos of just the 12 members of the leadership team, plus a group shot of 20 people. After speaking about the reduction/change with the photographer, and knowing the client’s intended use and desire to keep costs down (ideally under 10k), we decided to include a creative licensing fee of $5,000. This was loosely based on a $1,500 fee plus $300 per person and then rounded down a bit to make it more palatable. We made a few other small tweaks to equipment and were asked by the agency to add basic post-processing of 8 portraits, which we included in the following estimate (click to enlarge): 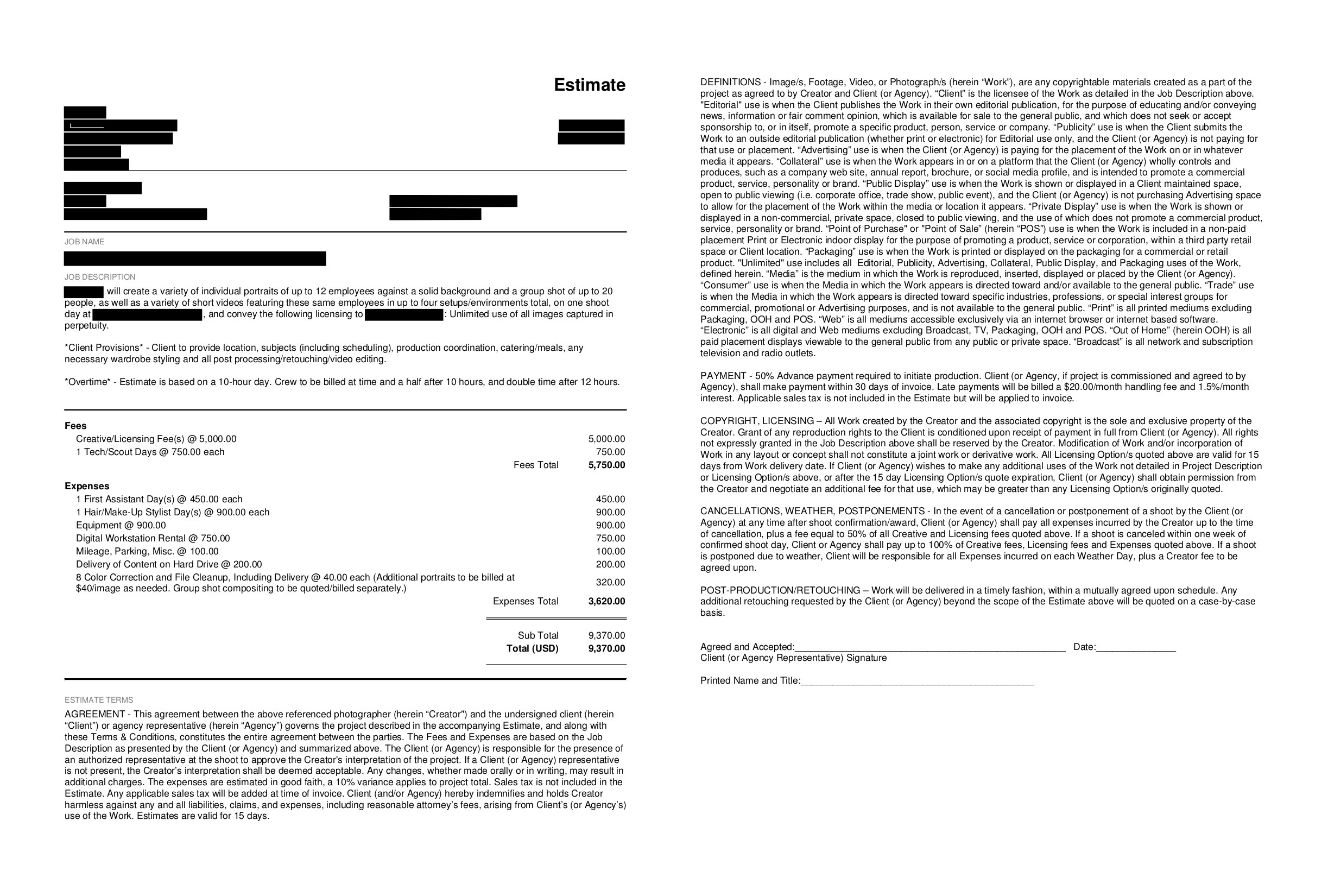