Shoot Concept: Images of large advertising displays in an airport

Licensing: Internal collateral use of up to 16 images in perpetuity for the client and portfolio use for the agency

Location: An airport in the northeastern United States 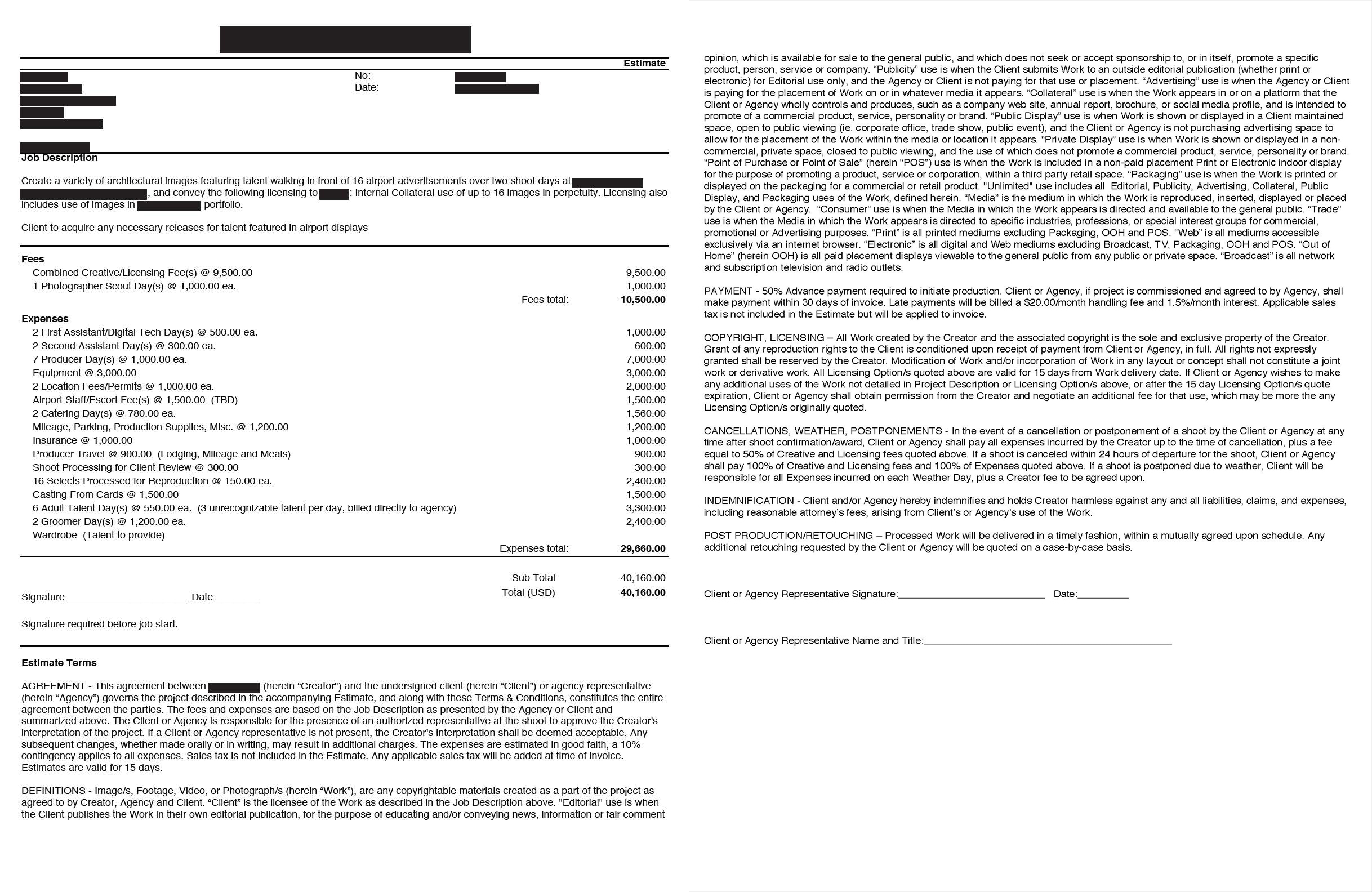 Creative/Licensing: The client wanted to photograph publicly displayed advertisements in an airport that the agency recently helped them develop and place. We’ve estimated many projects like this before, and while they typically come with tight budgets, those budgets are often justified by a low level of production needed to capture the content. This one was a bit different in that it came with an elevated level of production and unique logistical challenges, but the licensing was comparable to other similar projects, and was limited to internal collateral use by the client, and use of the images on the agency’s website as part of their portfolio.

After calculating a fee, I put pen to paper on the expenses, which as I mentioned, were based on a high level of production. For this kind of shoot, it’s rare that a client would have a big budget, but at the same time, they wanted to shoot professional talent in a major airport before and after the security checkpoint…not a simple task. I assumed they’d want to do this project with a really small footprint, but upon speaking with the art buyer, I learned that they anticipated a crew inclusive of the photographer, multiple assistants, a producer and a groomer, on top of the talent and agency representatives being present. I anticipated we’d need to scale down after presenting these costs, but regardless, we had to show them what it would take to execute the project as requested.

Photographer Scout Day: Part of the logistical challenge for this project was that some of the displays were before the airport security checkpoint, others were beyond it, and the agency wasn’t quite sure exactly where each display was. We therefore, included a scout day to help dial-in these details.

First Assistant/Digital Tech and Assistant Days: The photographer’s first assistant would be doubling as his tech, and he’d be shooting to a very mobile laptop workstation. We also included a second assistant to offer an additional set of hands to help move lighting and other gear around to the various locations throughout the airport.

Producer Days: The local pool of producers was bare, and the specific producer that the photographer and agency hoped to work with was actually based out of town and would be traveling in. In addition to the travel, scout and shoot days, I included adequate prep and wrap time for the producer to coordinate the project. Working with an airport can prove to be incredibly time-consuming due to security measures, especially when you aren’t working on behalf of an airline or the airport itself who could otherwise provide access and connections to ease the process. I therefore wanted to make sure we included enough time to accommodate a potential headache.

Equipment: I anticipated that the photographer would need to bring along $1,500 worth of grip, lights and cameras/lenses per day, over the course of two days.

Location Fees/Permits and Airport Staff/Escort Fees: This particular airport actually happened to have a bit of information on its website regarding commercial filming and shooting, some of which was based on the time on site (with dictated hours of shooting), and some of which was based on the number of people involved. For a still photo shoot (rather than video) with more than five people on site, they listed a location fee of $1,000 per day. They also listed various personnel at hourly rates, including operations officers, police officers, fire marshals, engineers, electricians, and “other” support staff. Based on this information, I anticipated we’d need staff listed at the $75/hr mark for 8-10 hours over two shoot days, plus some time on the scout day. I felt $1,500 was an appropriate starting point, but noted that it was TBD and elaborated in our delivery that this would need to be dialed-in as the project progressed.

Catering: Based on previous experience shooting at airports, I knew our catering option would be limited to the airport’s internal food services company. I included $60 per day per person for up to 13 people (including the crew, talent, and agency representatives).

Mileage, Parking, Production Supplies, Misc.: I included $50/day for parking, and figured we’d need to cover at least three cars for the talent, and three cars for the crew (they’d likely carpool rather than each drive individually). On top of that, I included $300/day for tables, chairs, walkies and other supplies, as well as $100/day for general miscellaneous expenses that might come up.

Insurance: I anticipated that the airport would require a certificate of insurance and that their requirements would likely eclipse what a typical photographer’s policy would cover. I, therefore, included $1,000 for the photographer to increase their policy as needed.

Producer Travel: As I mentioned, the producer would be traveling in, and I grouped their expenses into one line item. They’d require three nights of lodging (around $200/night in this market), and I included a $50/day per diem and about $100 for their mileage.

Casting from Cards and Adult Talent Days: As opposed to a live casting, the agency was interested in casting talent based on their headshots, which made sense since the talent would likely be unrecognizable anyway. This fee included the time (likely spent by either a producer or a local casting agency) to request headshots from multiple talent agencies based on certain demographics, organize and deliver the results, and then correspond with individual talent agencies to book and confirm the talent. Since they’d be unrecognizable, I figured $400-$500/day plus a 20% agency fee would be appropriate per talent, and noted that this cost would be billed directly to the agency.

Groomer Days and Wardrobe: The talent would be bringing their own wardrobe based on specs provided by the agency, but they requested for a stylist to be present to make sure they looked presentable. I included a rate that would allow us to bring in a stylist from another city if the limited pool of local stylists happened to be unavailable.

Feedback: Overall, I knew this estimate would be too high for them, and while I anticipated a discussion regarding a decreased level of production, they specifically asked to see what it would take to execute a project in this way. Not surprisingly, that’s exactly what happened. We were basically asked to take a scalpel to the expenses, and see what we could do with a reduced level of production (they were willing to concede to 2 talent on one of the days, were ok without a groomer, mentioned that they might be able to pre-scout the location, and said they could handle the retouching). After discussing some options with the photographer, we decided that he could handle the pre-production (for a fee) if it just meant hiring one assistant, doing a simple casting from cards, and corresponding with the airport (no second assistant, groomer, catering, scouting, producer). On top of removing all of those items, we reduced the equipment, came down on the location fees (since it would be much fewer people on-site), noted that the escorts would be TBD, came down on the insurance and casting, reduced the expense for the shoot processing for client review, and adjusted the misc. expenses appropriately.

These were certainly big cuts across the board, and here was the revised estimate (click to enlarge): 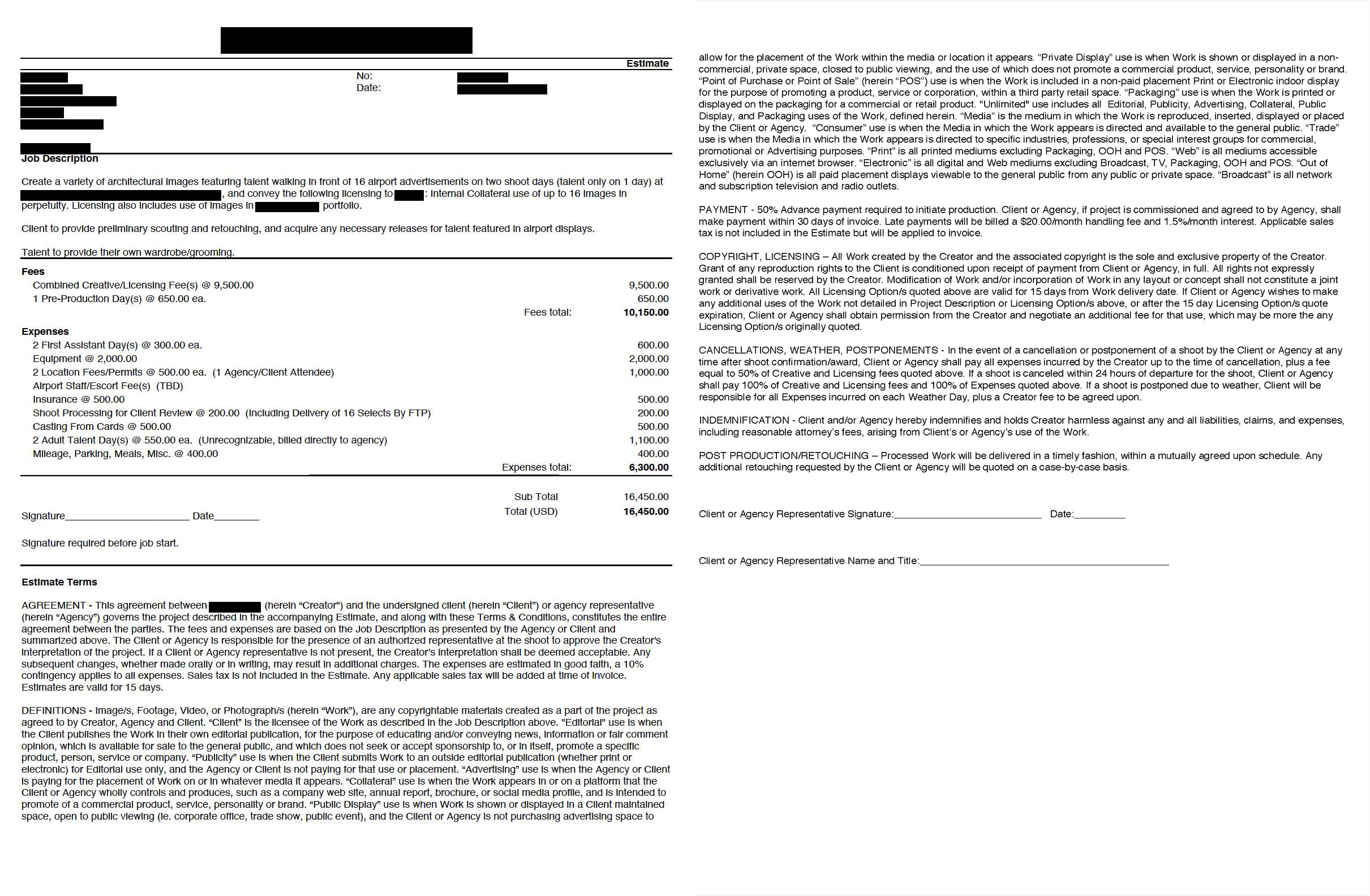 Feedback: Despite the cuts, the agency hoped to trim the budget even further, by about half the amount. Fortunately, they were willing to concede a bit more on their end as well. Rather than 16 displays, they were hoping to capture just 6, which would help to make the project a 1-day shoot. On top of that, the agency was also willing to do away with talent and just hoped to shoot unrecognizable real people as they walked by the displays. 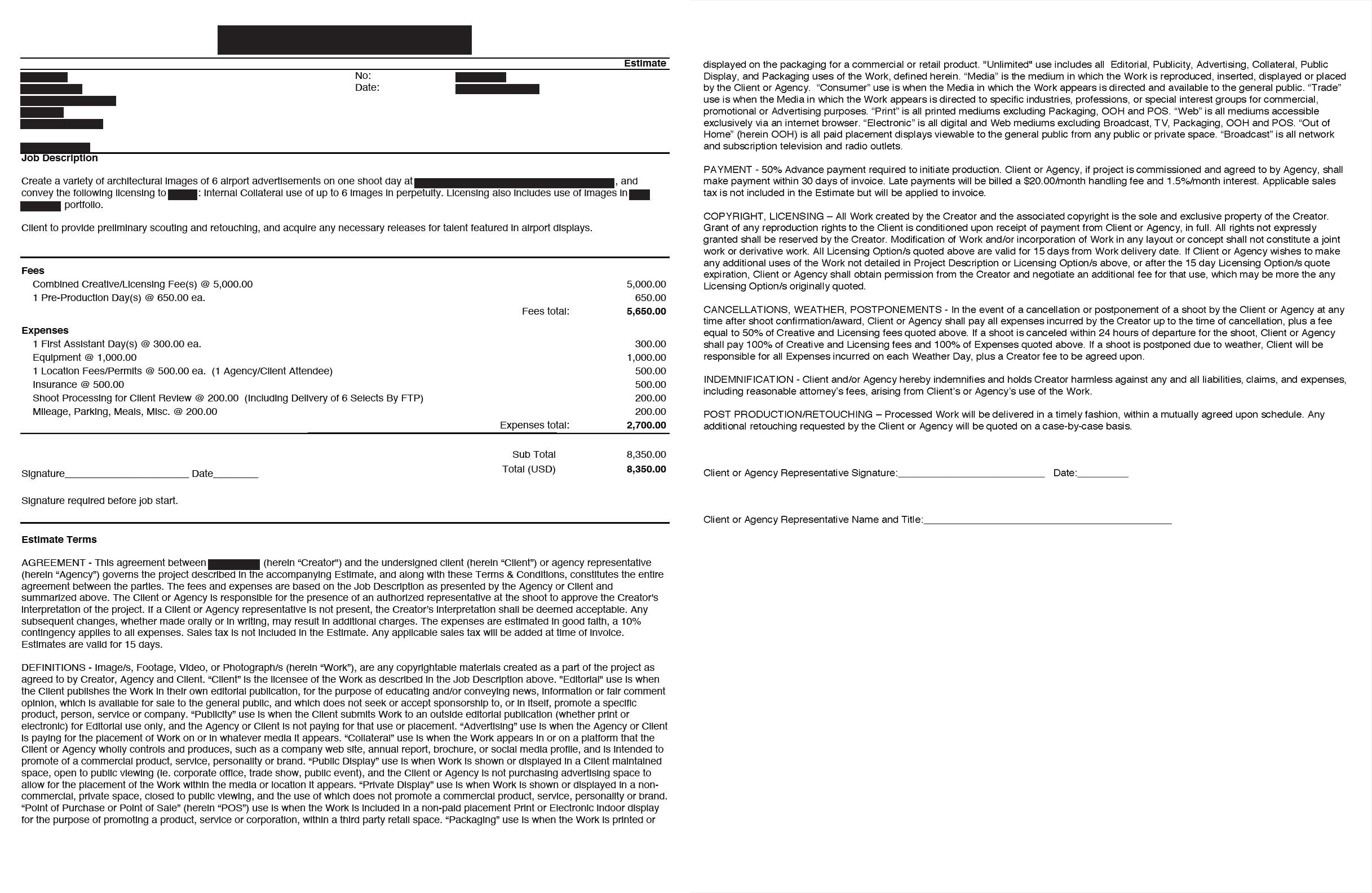 Results: The photographer was awarded the project, and given the light production footprint and the fact that the displays all ended up being before the security checkpoint, the coordination with the airport wasn’t too much of a headache.