Here’s a project that began seven years ago and just wrapped up last month. Back in 2004, I got a call from an art director at a landscape architecture firm that was completing a $7 million renovation of a 70 acre piece of land, transforming it into a nature preserve for a non-profit. They had replaced alien plants with species indigenous to the area and they created beautiful bridges, paths and sculpture gardens. They needed photographs depicting plant specimens and landscapes for a guidebook. Oddly, they came to me. I say oddly because I shoot almost exclusively portraiture. I don’t even show still life pictures in my portfolio, let alone plants. But there was something about the personality of my photographs that the client thought would work well for the book. I liked her and the project. And in spite of, or maybe because of how different this project was, I decided that I wanted to do it.

When I met with the AD, she showed me several examples of plant and landscape photographs so I could see what she liked and didn’t like, which was very helpful. She explained that the project would need to take place over a period of a year or more, so we could illustrate what the plants and landscapes looked like in the spring, summer, fall and winter (including snow). The AD was initially a little vague about the actual shot list, but I knew I would need some specifics in order to do the quote. So together we figured out that the final book would need 8 landscape photos and 32 plant specimen photos. We agreed to show the plants close-up, on white background. (I found out that here was a house on the property that we could use as a studio.)

I went home and thought about how I would execute the project, and how I should structure the proposal based on that. I did some test pictures to get a sense of what kind of set-up I would need and how much time it would take to photograph each plant. I had shot lots of people on white background before, but never still life. I wanted the plants to be floating rather than lying on a white surface. So after some awkward and dangerous attempts on a ladder, I bought a bakers scaffold, some ¼” glass, and some plywood so I could build a window with a frame that I could stand on and easily shoot down on the plants – with white paper lit up on the floor below. (I’m sure the real still-life photographers out there will tell me there’s an easier way to do this.)

Even though they were only planning on using an average of 10 pictures from each of the 4 seasons, I figured we would probably want to shoot twice that number to cover ourselves. Then we’d have the luxury of choosing which plants and landscapes looked most interesting for each part of the year. I would plan to shoot landscapes early and late in the day, and the plant specimens in between.

Any time I put together a quote, I try to balance my need to control my costs with the client’s need to understand what they’re getting charged for and to control their costs. For this project, since I wasn’t completely sure about how long it was going to take me to get pictures that I was going to be happy with, and since I wanted to be able to experiment a bit, and since I knew that the project was likely to evolve over the course of a year, I wanted to build some flexibility into the schedule. Figuring that I could comfortably make 10 pictures/day, I budgeted about 2 shoot days for each season.

That in mind, here’s the estimate I put together (click to enlarge): 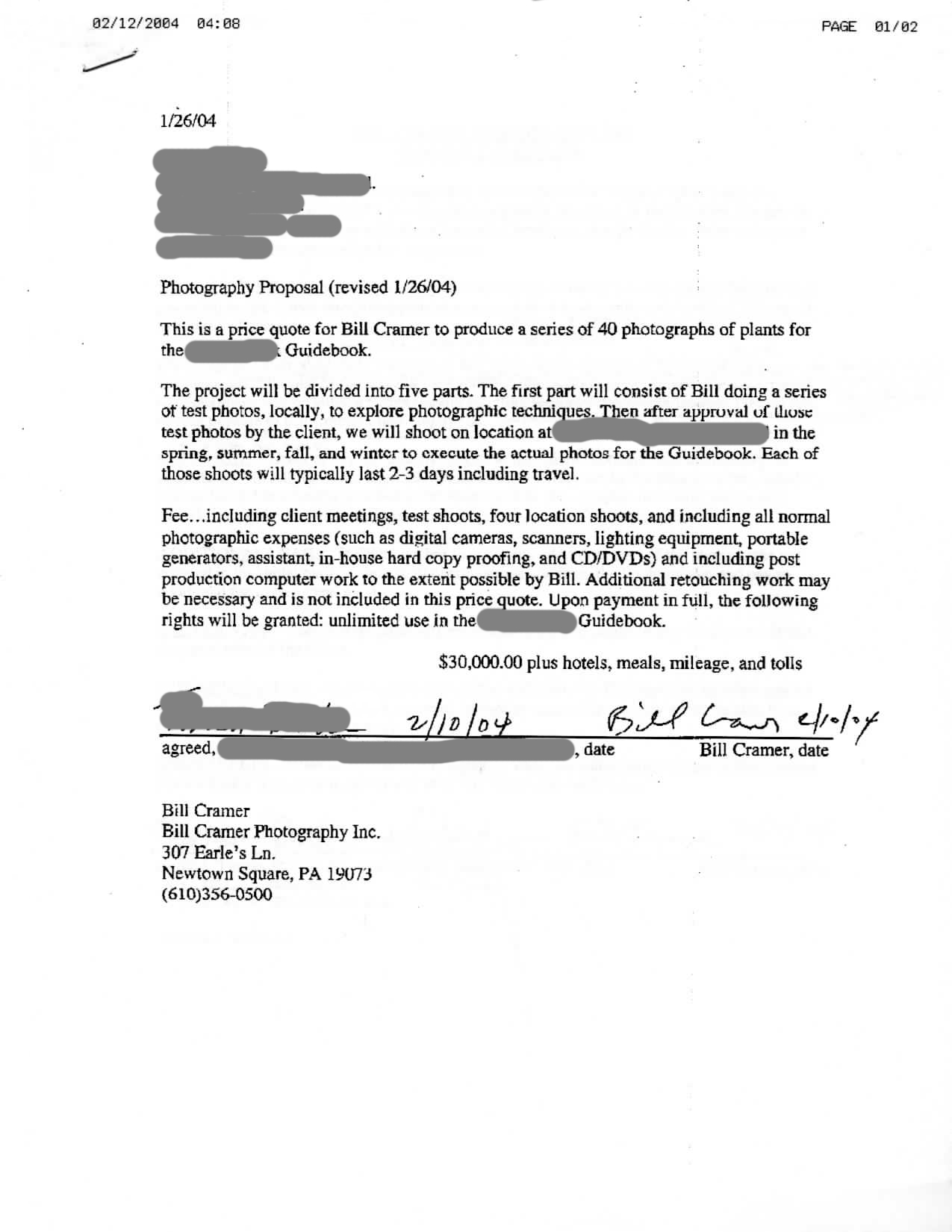 I decided that in addition to the four seasonal shoots, I wanted to build in an initial test phase so that we could be really clear about what the specimen pictures were going to look like (exactly what the white background would look like, what the light on the plant would look like and what the post-processing would look like – and get approval before we were shooting for real).

Even though I was planning on shooting as many pictures as I could, the fee I quoted entitled them to use 40 images in the guidebook. I viewed the actual licensing as somewhere between commercial and editorial. They just needed the pictures for the book itself. They didn’t have other plans beyond that. Even though the nature preserve was a non-profit, they had substantial financial backing. They weren’t hiring me because I was cheap. They were hiring me because they liked my pictures. Since the photographic expenses were all within my control, I decided to bundle them with my creative fee for each segment of the job, and then bill my actual cost for the hotel, travel and meals. I figured on 2 shoot days and a travel day for each of the four seasons (it was a four-hour drive each way), along with a license for 10 images, which I decided was worth 4000.00. Plus I’d need to cover photographic expenses of an assistant (750.00), equipment (500.00) web gallery (350.00) and file preps (10 @ 40.00 = 400.00). 4 shoots plus 1 test phase made 5 segments x 6000.00/segment = $30,000.00.

The client was comfortable with my price and only made a few small revisions to my terms (click to enlarge below). They wanted me to have any order changes made in writing, which was fine with me. 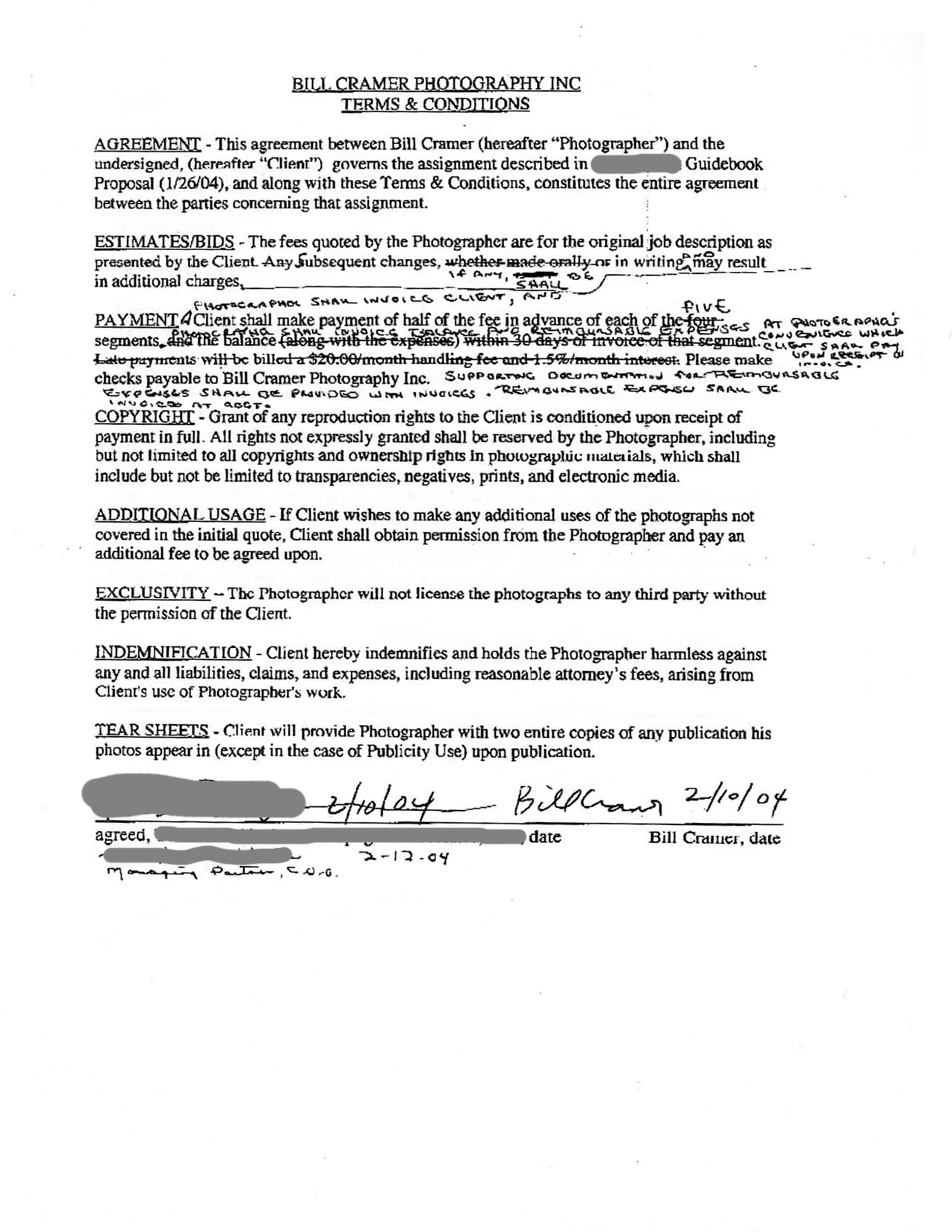 The project went remarkably smoothly that first year. I made my quota of pictures, and I only almost crashed through my makeshift window once. But then we hit some snags. We didn’t have any snow that first winter. So we had to wait a year for the next decent dusting. Then the AD fired the designer. Then the AD left the landscape architecture firm, and the client took over managing the project. Then the whole thing was on hold for a couple of years. When the project was revived in 2009, they needed a few more pictures to round things out after deciding to double the size of the book. After we went through a round of file processing and retouching it looked like it would finally be published. Then more radio silence. I would check their website every few months, then forgot about it myself for a while. Then finally, at the end of 2010, I checked their site and there was an announcement for the guidebook, so I bought a copy.

I had known for a while that they were planning to expand the book (and consequently, the licensing). But until it was actually published, there wasn’t anything concrete to bill for. When I got my copy, I had to reconcile the use of the additional pictures. Looking back on my 2004 estimate, I could have been more clear. There is an implicit license for 40 images, “This is a price quote for Bill Cramer to produce a series of 40 photographs…” But it really should have said, “This is a price quote for use of up to 40 images…” Also, I should have specified the cost for additional images.

This lack of clarity put me in the awkward position of justifying to my client’s client (now my direct client) the additional charges for use of the additional pictures. First, I had to make sense of it myself, so created a spreadsheet detailing all the invoices I sent and what they covered (click to enlarge): 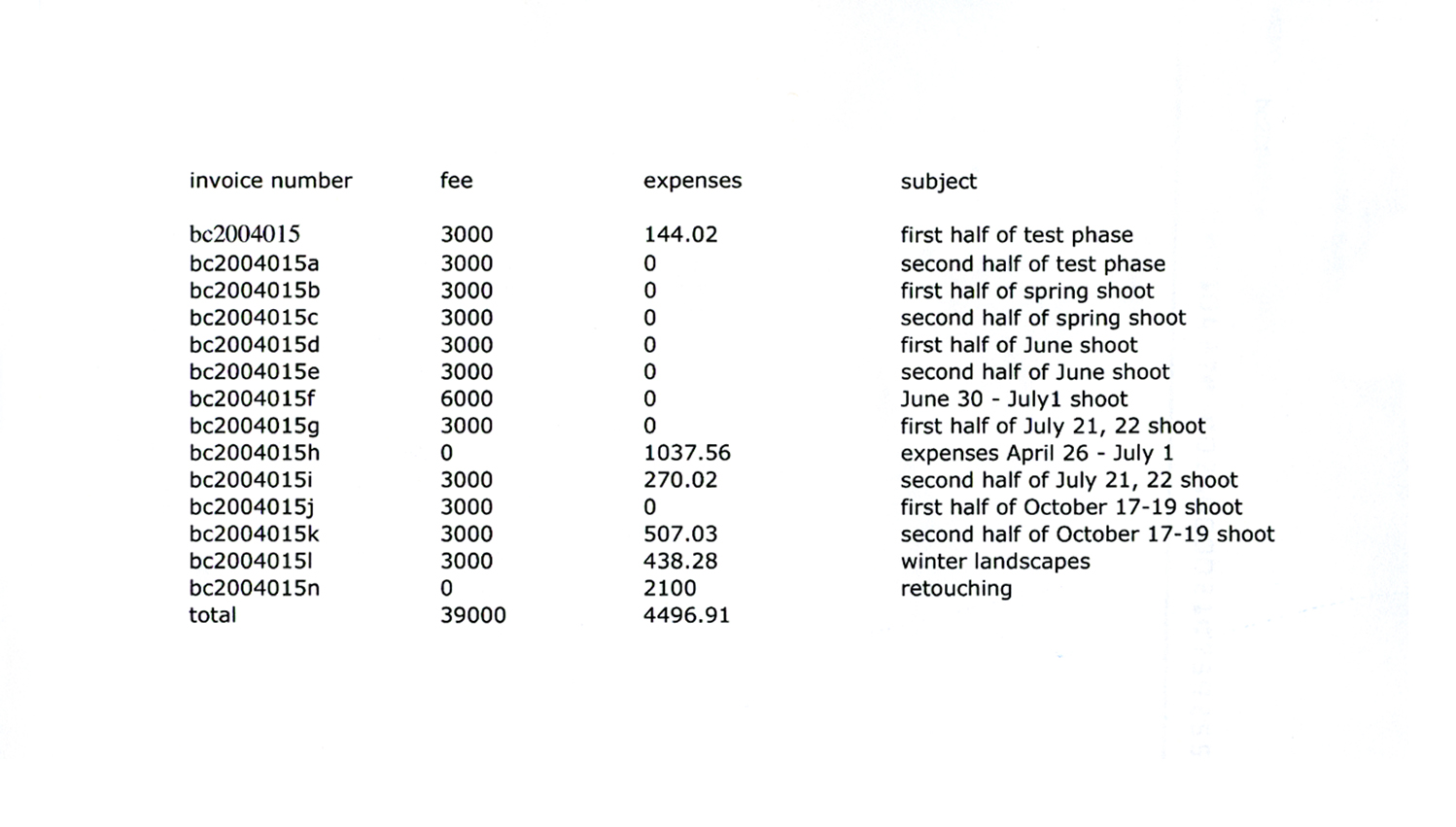 Then I composed an email spelling out the charges for the additional usage (again, click to enlarge): 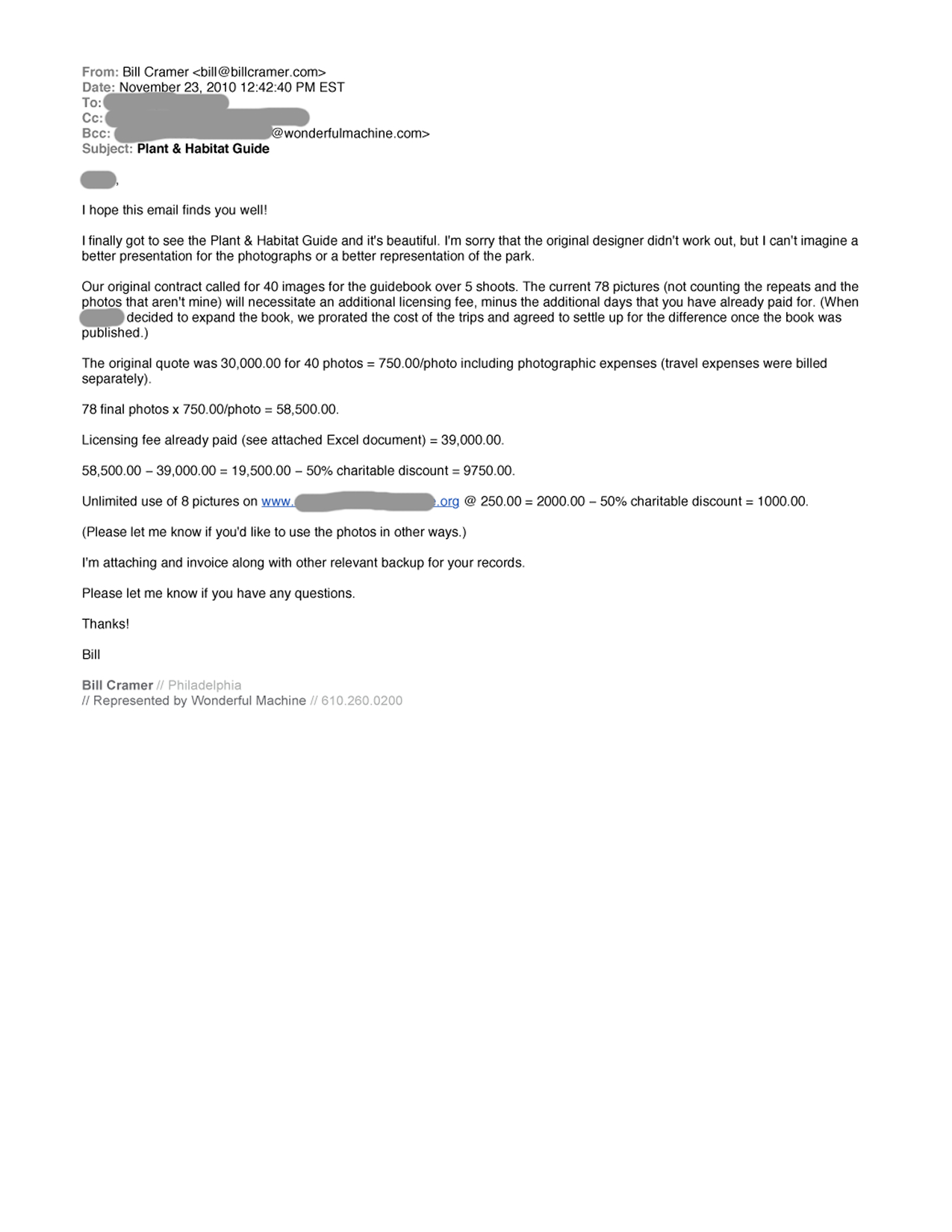 In an attempt to make up for my sloppy initial estimate, and to account for the fact that I had grouped the fee with photographic expenses in that estimate (leaving the actual licensing fee a little murky), I factored in a charitable discount to send the message that I wasn’t trying to rake them over the coals, but simply get fair compensation for the additional usage.

This task was made a bit easier due to the fact that the folks at the nature preserve went ahead and put several of my pictures on their website without my permission. If they would have otherwise put up a fuss, they were less likely to do so now. Anyway, they paid the invoice and sent me a bunch more copies of the guidebook. And it actually looks pretty good, so I’m left wondering if I should start promoting myself as a nature photographer.

The invoice (click to enlarge) with a sample of the guide book: 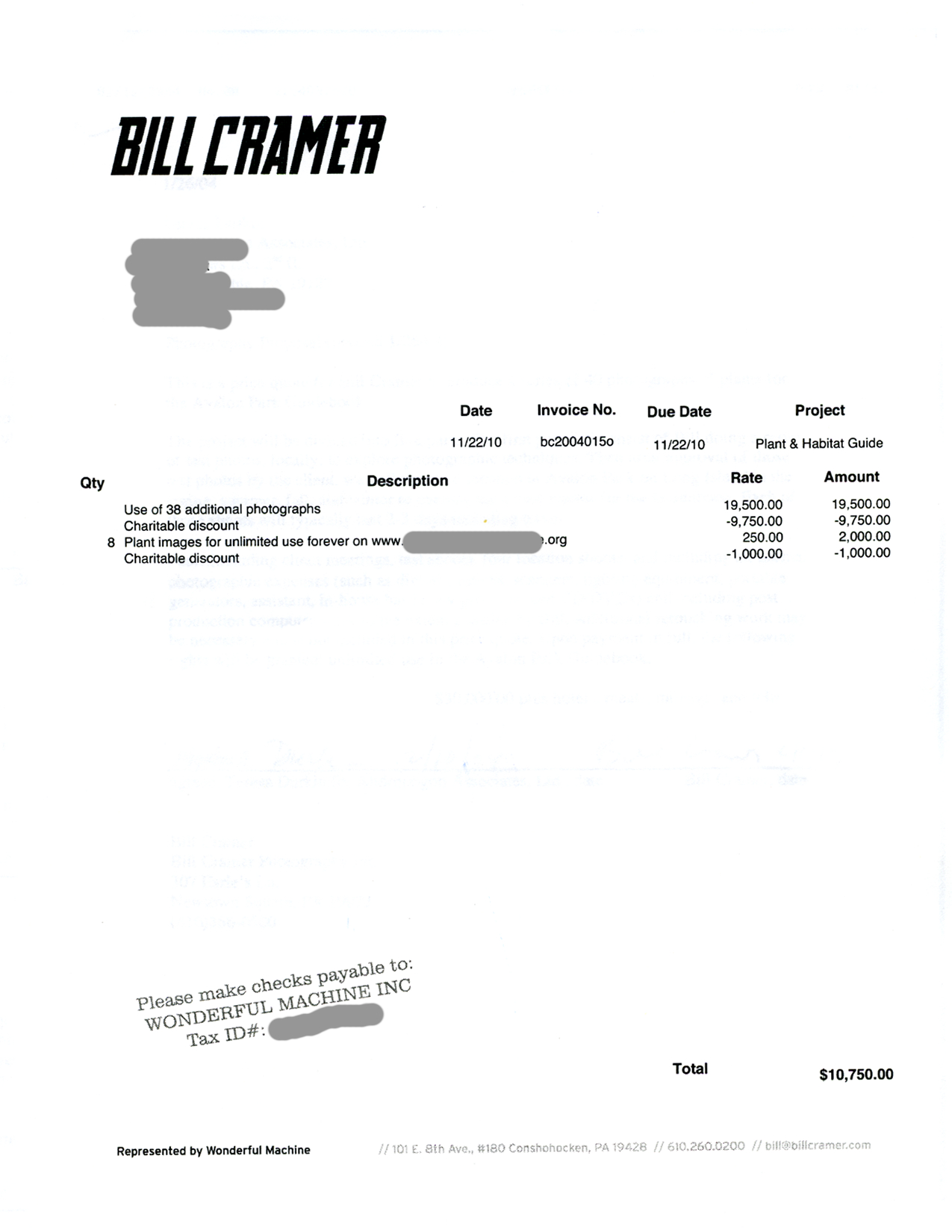