Concept: Portraits of three people who received treatment from a hospital

Licensing: Unlimited regional use of up to 30 images for two years 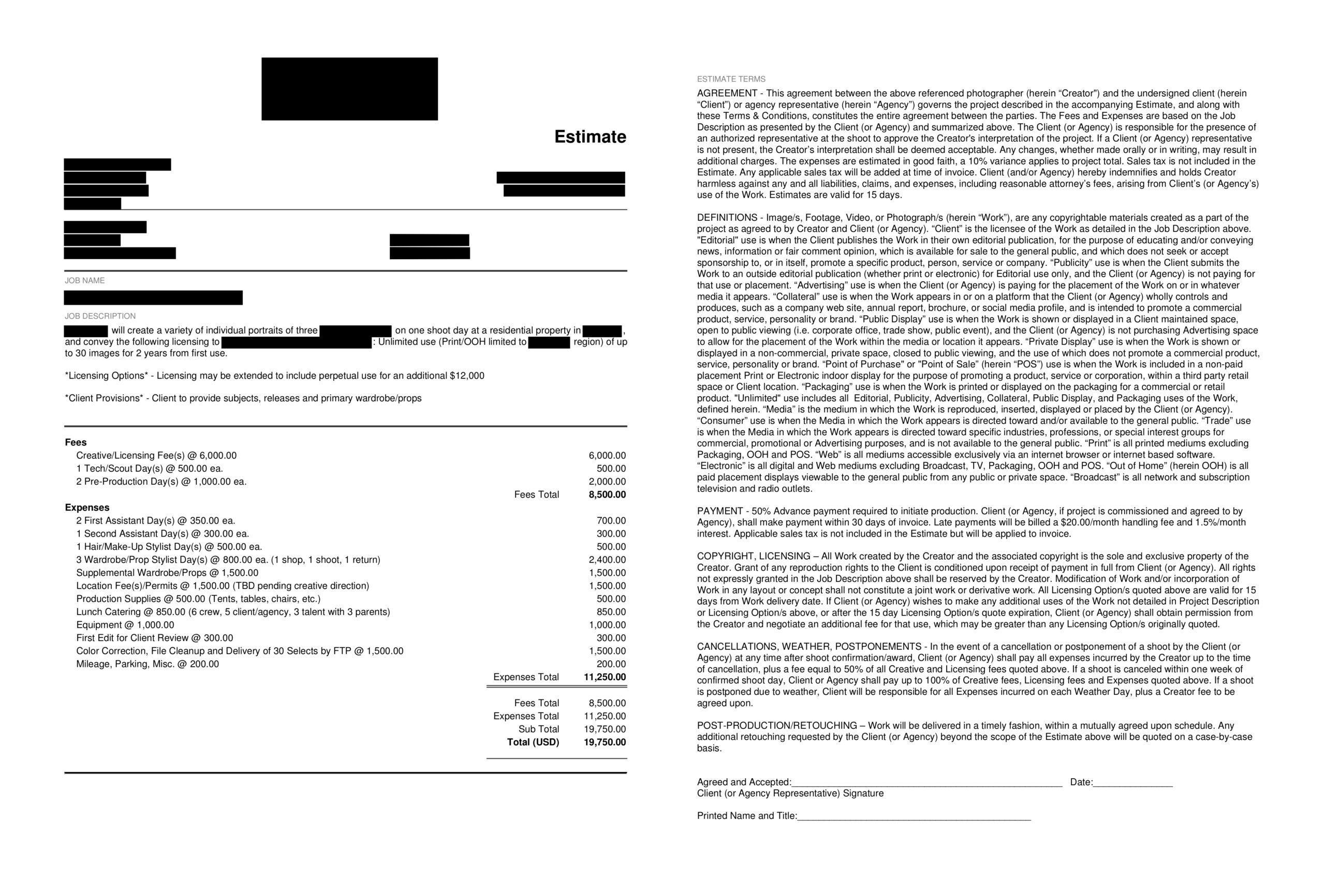 The agency identified three patients to feature in a regional advertising campaign to promote the hospital, and all of them would be photographed on one day at a single TBD location. We knew they hoped to license about 10 images per subject; however, it was more likely that one or two images per person would be used in any significant way.

Putting upward pressure on the fee was the unlimited use requested and their intent on using the images in print ads and on billboards. Downward pressure was placed on the fee due to the campaign’s geographical limitations, the likelihood they’d use just a few shots per person, and the duration of use capped at two years. One way I thought about it was per subject, basing the fee around $2,000 per person. Another approach was that perhaps the first set of images was worth $3,000, and the second and third sets were worth $1,500 each. Both approaches initially felt a bit low, but I’ve priced a handful of similar projects recently, and given all of the factors, I knew a palatable fee would be somewhere between $5,000-$7,500 plus expenses. We wanted to be competitive, thus landing at $6,000 for the fee. The agency also asked us to give them an option for perpetual use, and I quoted that at an additional $12,000 ($18,000 total creative/licensing fee), which was three times the 2-year price.

Tech/Scout Day: This covered the photographers time to walk through and see the location prior to the shoot.

Pre-Production Days: While the concept was straightforward, the photographer would still need to spend a decent amount of time lining up the production, and this accounted for that time. Often, for a shoot like this we include a producer to do pre-production work. However, many of the tasks were within the photographer’s wheelhouse, and he had strong connections and the ability to line up the crew and coordinate logistics quickly on his own.

Hair/Makeup Stylist: We included one day to help with minor touchups and make sure the patients looked presentable. I’d typically aim higher on the rate, but, again, this was appropriate for the crew in this particular city.

Wardrobe/Prop Stylist: The exact scenarios were still TBD for each patient, but we knew they would each participate in some activity that required a mix of supplemental wardrobe and props. In addition to the shoot day, I included a day to prep and a day to return wardrobe/props. I based the wardrobe/prop expense on $500 per scenario/talent.

Location Fee: We were initially told that the location should be non-descript, but based on the creative brief it seemed as if a residential property would offer a few indoor and a few outdoor locations and would be appropriate to help stage the shoot. Typically I’d include a location scout to help find such a property, but the shoot needed to happen very quickly, the photographer was comfortable offering up a few houses of local family/friends, and we felt this rate would be adequate to reimburse their favor.

Production Supplies: This covered a few items to help reduce the footprint within the house, and to ensure that the crew and client had a place to set up shop.

Catering: This was based on $50 per person

Equipment: This covered the photographer’s own grip/lighting gear and cameras/lenses.

First Edit for Client Review: This covered the photographers time to do an initial edit on the content captured, and provide a web gallery for the client to choose from.

Color Correction, File Cleanup, and Delivery of 30 Selects by FTP: The post-production would be pretty minimal, and we based this on $50/image.

Mileage, Parking, Misc.: While likely not needed, this included just a bit of buffer for unforeseen expenses.

Results: The photographer was awarded the project