Licensing: Unlimited use of 12 images for 6 months 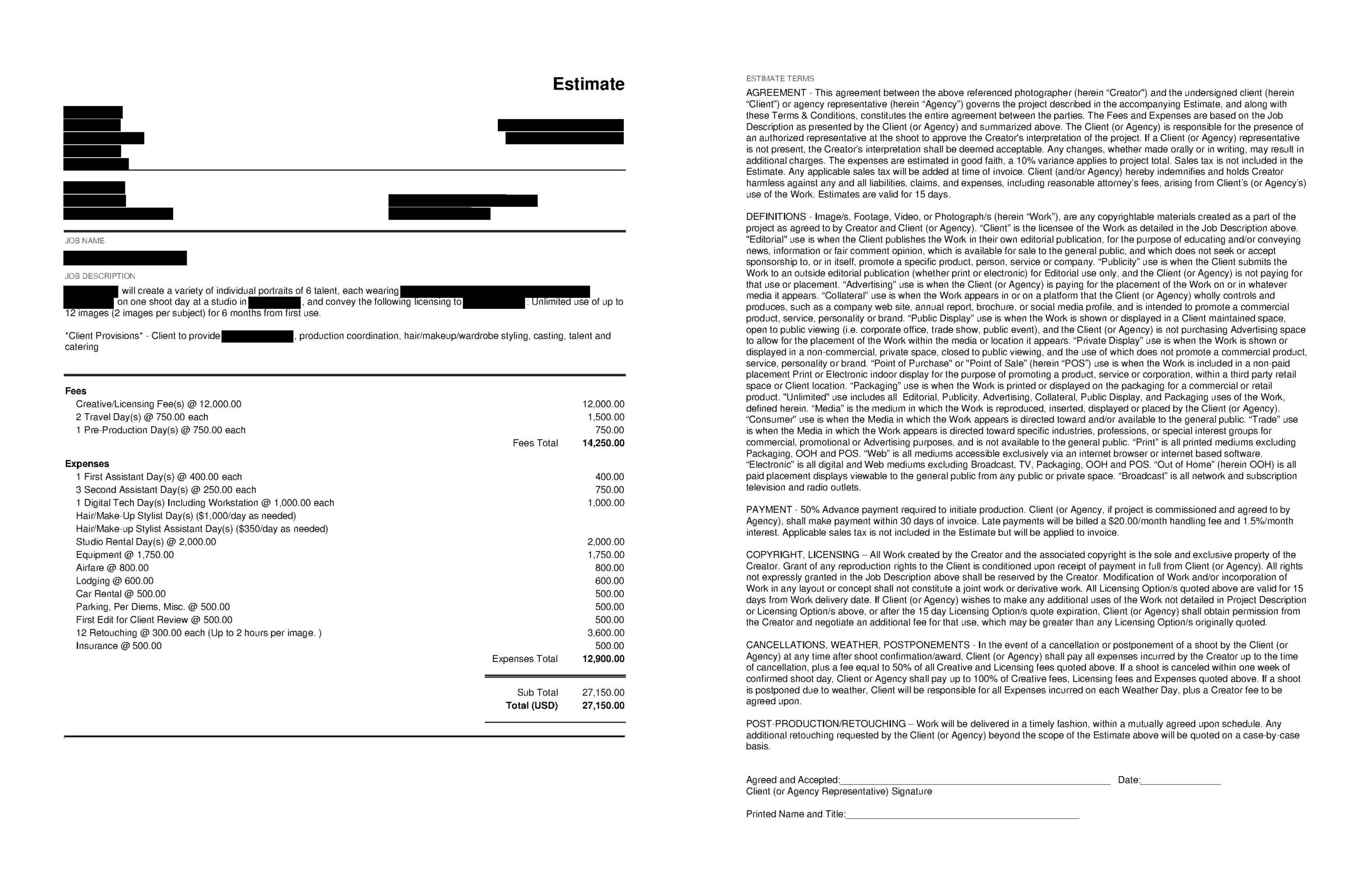 Creative/Licensing Fees: The client asked the photographer to bid on a project for the brand’s new campaign, despite having little to no creative brief. The client saw a picture they liked in the photographer’s portfolio, and wanted to accomplish a similar aesthetic while integrating their product. We knew that they envisioned photographing 3 men and 3 women, all in a similar setup against a solid background, and they hoped to walk away with 2 images for each subject, totaling 12 final shots.

Initially, the usage was described to us as primarily being focused on social media, placement on their website, limited print advertisements and a mix of other guerilla style postings out-of-home, all for 6 months. When I discussed the usage with the client, it became clear that they wanted unlimited use during this time frame, despite the limited intended use they described. On one hand, the usage did seem quite limited, especially in duration, but on the other hand, the prominent brand would likely take out ads in high profile publications, and would likely pay a lot for their ad buy. Additionally, downward pressure was put on the fee due to the photographer’s limited experience working with such a brand, his eagerness to collaborate, the simple nature of the project, and the likelihood that only one or two images might see the light of day in advertisements, as most of the images would likely just end up on their website and on social media for a short duration.

After weighing all the factors, and based on the client’s intended use, I initially priced each of the first 6 images at $1,500 each, and then each of the additional 6 images (the second portrait for each subject) at $750 each, which brought me to $13,500.  My gut instinct based on other similar projects was that a fee between $10k-$15k would be appropriate for the day, and based on this experience and the eagerness of the photographer to get the job, we ended up going with $12,000, which broke down to $1,000/image if you look at it that way.

Travel and Pre-Production Day(s): The shoot would take place across the country, and the photographer would need a full travel day to fly there, and a full travel day to fly back. I also included one pre-production day for the photographer to book travel, wrangle crew and go through the paces with the client prior to the shoot. Typically I’d include a producer to help with these tasks and to handle the coordination of the entire project, but the client planned to coordinate many of the elements for this project, and the photographers was comfortable with just 1 day of prep to handle his tasks.

Assistant and Digital Tech Day(s): The photographer would be bringing an assistant with him, and hiring another one locally. I’d typically anticipate that the traveling assistant would be the “first assistant” and the local would most likely be the “second assistant”, but we flipped that in this case, as the photographer’s traveling assistant gave him a favorable rate for the three days out of town. We included one day for the digital tech, anticipating $500 for their day, plus another $500 for a basic workstation.

Hair/Makeup Stylist and Assistant Day(s): The client said that they had a few people in mind for hair/makeup styling who they planned to hire directly, but asked us to provide a sense of cost if they wanted the photographer to handle this. So, we therefore detailed TBD prices that didn’t impact the bottom line.

Studio Rental: This was based on feedback from a few local studios that we contacted to discuss rates and availabilities.

Equipment: While the photographer would be traveling with a bit of gear, he’d still need to rent a decent amount upon arrival, and this rate was primarily based on quotes received from the studios to provide such equipment.

Airfare, Lodging, Car Rental: I used Kayak.com to price appropriate travel expenses for the photographer and his assistant.

Parking, Per Diems, Misc.: This included $60/day/person as a per diem for the photographer and his assistant while traveling, plus $50/day in miscellaneous and unforeseen expenses.

First Edit for Client Review:  This covered the time it would take for the photographer to do an initial pass on the images, and provide the client with a gallery of images to consider

Retouching: This was based on a post processing rate of $150/hour, assuming two hours per image for each of the 12 images.

Insurance: We included this expense to help the photographer increase and maintain an appropriate policy.

Results: The client asked for two revisions. First, they decided to put hair/makeup responsibilities on the photographer, and asked that we send a revised estimate including those expenses, which was not a problem at all. Second, they asked if they could get 1 year usage for the 6 month price we quoted. I typically don’t recommend giving up something for nothing in return, but based on my previous experience with similar projects/budgets, and given how eager the photographer was to get the project, we decided to accept their offer. We submitted a revised estimate, and the photographer was awarded the project.

After calculating some rough numbers, I knew we weren’t going to be able to hit that, so I gave them a ring to negotiate. I learned that they could limit the usage to Web Collateral use and placement in up to 10 window displays of 3rd party retailers. This was a big jump down from the Unlimited use we were previously granting them. With this in mind, we submitted the following estimate (click to enlarge): 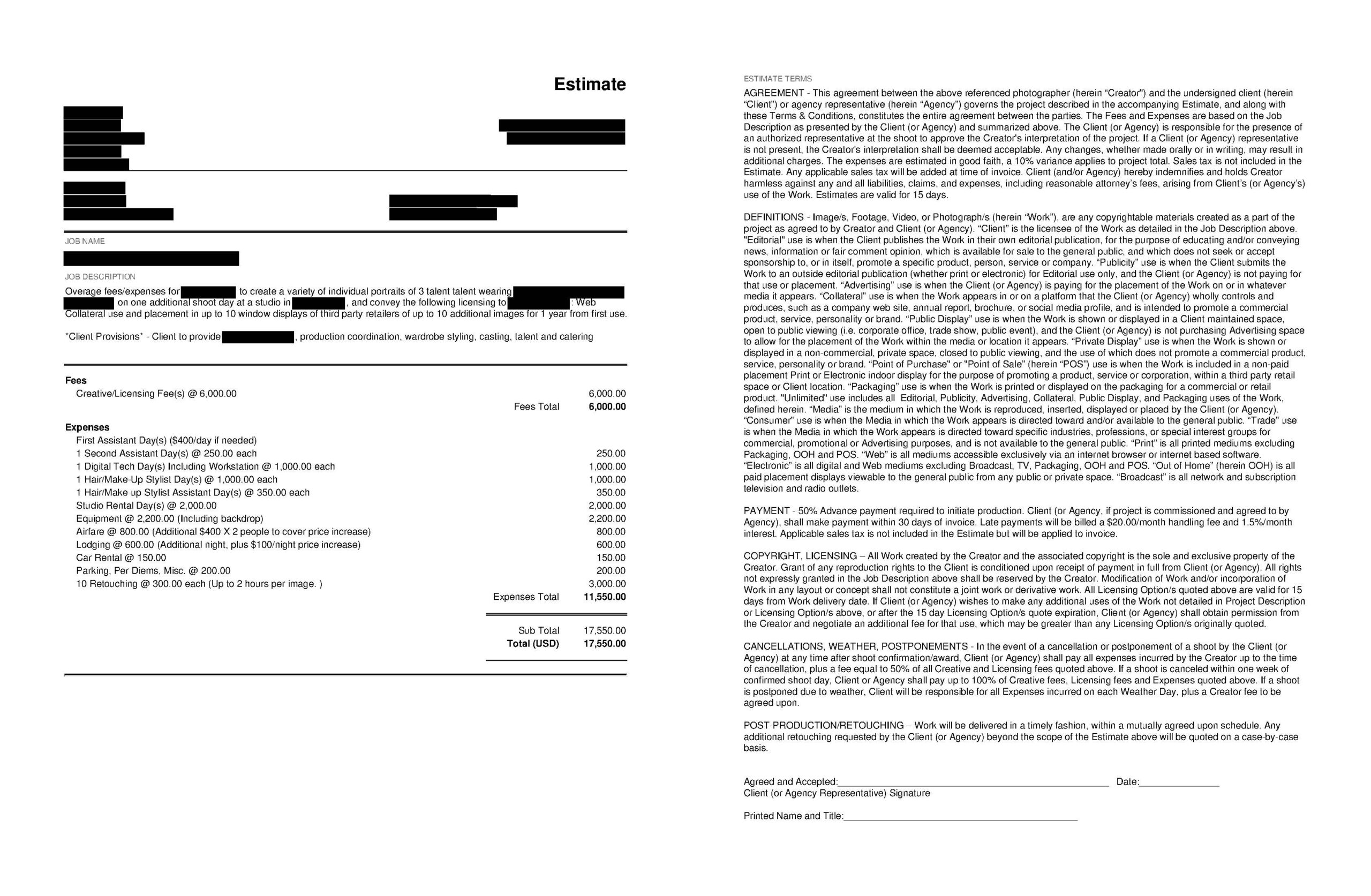 We landed on $6,000 for this additional day/usage which was appropriate considering all of the factors. We also detailed the associated expenses with the additional day. We removed the first assistant (while essentially marking it as TBD) since the photographer didn’t feel they’d be needed on the second day consider the lighting setup would be similar to the first day, and his second assistant and tech could lend a hand as a cost savings measure. We increased equipment a bit for this additional day to account for a specific background the client wanted to procure, and included appropriate travel expenses in addition to more post processing time.

The overage for the additional day was approved, and the photographer quickly launched into pre-production to line everything up.