Licensing: Unlimited use of up to 60 images for two years from first use 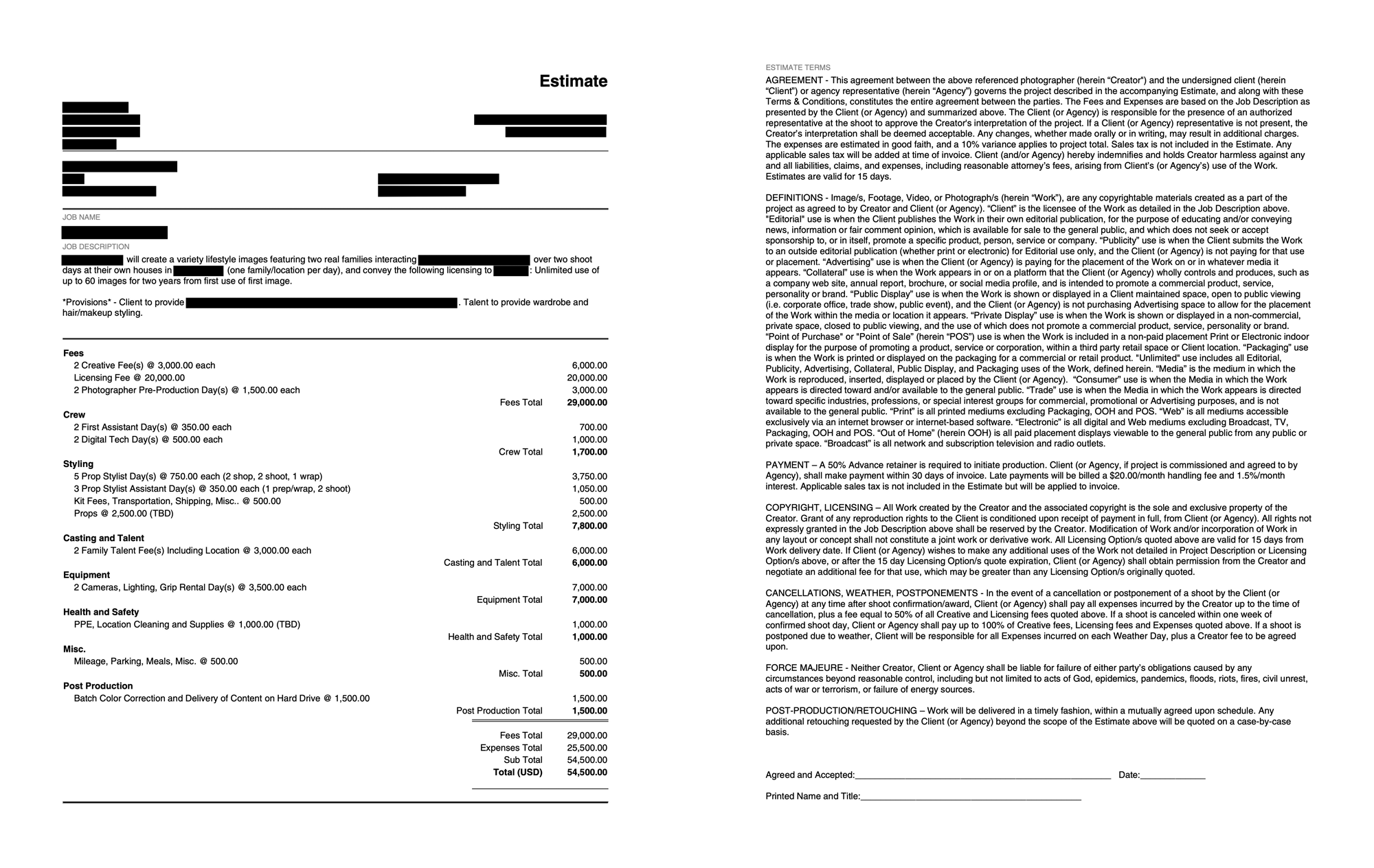 Creative/Licensing Fees: The photographer came to me having never done a commercial assignment with an ad agency or a client of this size before. His previous work focused on family portraits and reportage, and that was exactly the kind of content this campaign called for. The agency hoped that the photographer could present options of real families to them using his personal connections, rather than working with a casting director or talent agency. These families would be photographed in their actual homes interacting in staged setups, that would ideally look as authentic as possible considering they were real family members. The shoot would take place over two shoot days, with two families, each in their own homes. While the shot list was a bit of a collaborative effort, we settled on 60 final deliverables for unlimited use for two years. Based on previous similar projects I’ve estimated, I had a sense that this client would want to end up paying a few hundred dollars per image if broken down that way, and likely around 10-15k/day for a creative/licensing fee. We were asked to break out the creative fee from the licensing, and I landed on $3,000/day plus $20,000 in licensing fees. There would also be two pre-pro days added in, which I included $1,500/day for. As we approached $30,000 for these items collectively, I felt confident that we were in the right ballpark, especially considering this would be the photographer’s first assignment like this.

Crew: I included a first assistant and a digital tech, each for the two shoot days

Styling: The families would wear their own clothes, so we didn’t need a wardrobe stylist, but there was definitely a need for specific props based on the creative brief and the situations being prescribed by the shot list. I therefore included a prop stylist with an assistant and the appropriate expenses, but marked the prop costs as TBD since we were still sorting out the exact prop needs.

Casting and Talent: Based on previous projects we decided that $3,000 per family would be appropriate to cover each family and their property.

Equipment: While we initially started much lower due to the photographer’s style and lighting approach, the agency specifically asked us to include $3,500/day for equipment.

Health and Safety:  On all shoots now, we are considering PPE and cleaning supplies at a minimum, and on some shoots we include a health/wellness officer. In this case, since we were still sorting out the exact families and their comfort level with a minimal production, we marked this at $1,000 while bidding. At most, we anticipated hiring a cleaning company to come clean the location after the shoot.

Misc.: I included $250/day for each day to cover miscellaneious and unforeseen expenses that might arise.

Post Production: I included $1,500 for what I anticipate would likely be about a day of post, just to organize the assets and delivery them, even though the agency would be handling the heavy lifting on the retouching.

Feedback: The first item the agency wanted to discuss was the licensing. Rather than select 60 images after the shoot and have the usage period start when the first image was used, they wanted to be able to make selects over the course of the two year licensing period, and have each image start a two year licensing period when each image was used. It seemed odd to me, but regardless, I wanted to account for the potential lengthier usage term that would be possible, and the work that the photographer would have to do each time more files were requested throughout the two years. I had a very frank conversation with the art buyer about this request, and they suggested that they had $15,000 potentially available to put towards this licensing request. That seemed like an excellent deal, so we ran with it and adjust our estimate. Additionally, we learned that the production company involved with this project planned to pay the crew, styling team and talent directly via a payroll company, and that they’d handle any cleaning fees directly as well. They therefor asked us to revise our estimate to reflect that. 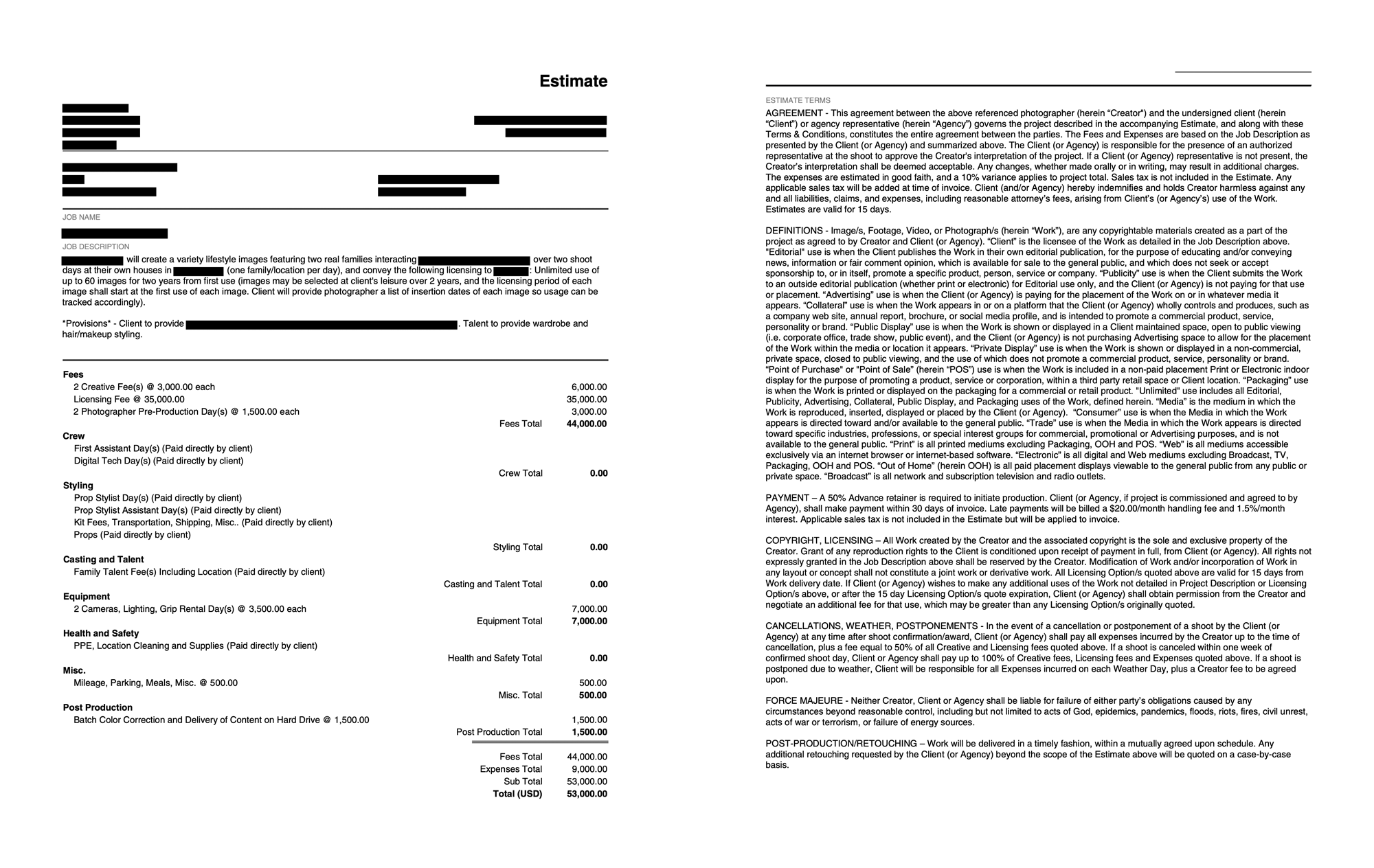 Hindsight: Given the extra $15k that magically appeared, I wonder if we started too low initially. Also, it seems many shoots in these strange COVID times revolve more around the resources that a photographer has available to them (family/friend talent and locations specifically) as opposed to the actual appropriateness of that photographer for the assignment, which is a bit disconcerting. I think the photographer was a great choice for this campaign, but I’ve seen other projects where seemingly perfect photographers drop out of the running because they don’t have that perfect talent/location at their fingertips.