Concept: Lifestyle images of real people going about their day while wearing the brand’s apparel

Licensing: Web Collateral and Web Advertising use of up to 30 images for one year

Agency: Medium in size, based in the Northeast 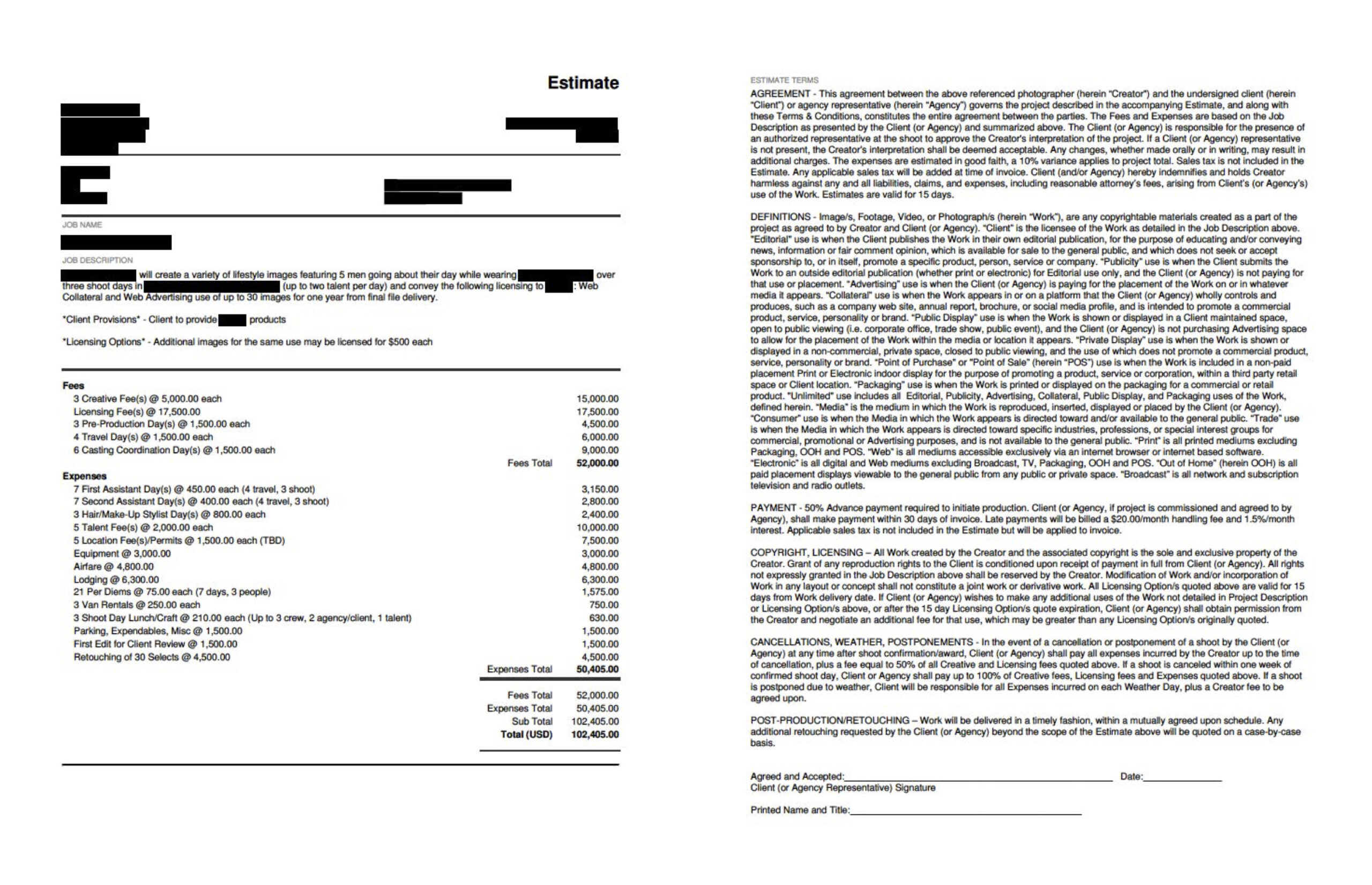 Creative/Licensing Fees: Five models would be photographed over three shoot days in different cities, resulting in 30 total images (six images per subject). The usage was limited in duration to one year and limited in exposure to web ads and placement on the brand’s website. It was clear in our conversations that they’d likely use one hero shot of each talent for web ads, and the rest would land in a gallery on their website. For each subject, I decided the first image would be worth $1,500, the second image $750, the third $500, and the remaining ones $250. That amounted to $3,500, which I then multiplied by five to account for the number of subjects, arriving at a total of $17,500. Separately, I included a creative fee of $5,000 per shoot day. While I typically combine the creative and licensing fees, in this instance I decided to break it out. In addition to the photographer being accustomed to pricing this way, he was bringing something unique to the project, and I wanted to make sure the value of the contribution was detailed. Specifically, the photographer had recently completed a long-term personal project that resulted in a library of talent that they’d ultimately rely on for casting (more on that later).

Pre-Production Day(s): There would be a fair amount of travel coordination and crew to line up. I decided three days would be appropriate for the photographer to line everything up.

Travel Day(s): The shoot would take place consecutively over the course of a week, with a day of travel before, after, and between each shoot day.

Casting Coordination Day(s): The photographer had amassed a huge library of talent with whom he collaborated and developed relationships while working on a personal long-term project, and he planned to rely on that network to find talent for the this production. That was, in fact, the main reason he was being considered for the project. We included two days of casting coordination for each city, allowing the photographer to reach out to talent prospects, fill them in on the project, gauge interest, present them to the agency, and coordinate bookings.

Assistants: The photographer planned to travel with his first and second assistant, and I included the appropriate amount of travel and shoot days for each.

Hair/Makeup Stylist Day(s): We included one local stylist per day for each of the three cities.

Talent Fee(s): We decided  $2,000 per person was appropriate to offer to models, and this fee was in line with rates we previously paid when working with “real people” talent.

Location Fee(s)/Permits: While this was a bit of an unknown, we included $300 per subject to account for location fees and/or permits. Because it was initially unclear if we’d be shooting in their workplace or out on the street, I wanted to make sure that at least a few hundred dollars would be available to cover permitting for each subject.

Equipment: I included $1,000 per shoot day for the photographer’s own camera, grip, and lighting gear.

Airfare: This was based on research for one-way flights to each of the cities and then back home for the photographer and his two assistants.

Lodging: I based this on six nights, at $350 per night, for three rooms/people.

Per Diems: I included $75 per person per day for the photographer and his assistants to cover meals while traveling.

Van Rentals: This included transportation and fuel for two days in each city.

Lunch/Craft: We were initially told by the agency we wouldn’t need to include catering but instead should budget for craft and a light lunch. I included $35 per person.

Parking, Expendables, Misc.: I included $500 per shoot day to account for these items and other unexpected items.

First Edit for Client Review: This was based on $500 per shoot day. The fee covered the photographer’s time to do an initial pass of all the images and generate a web gallery for the agency to make selects from.

Retouching: This was based on $150 per image, which I anticipated would cover an hour of retouching for each subject.

Feedback:  Even though the client requested a “lean and mean” shoot at first, it soon became clear that they wanted a higher level of production for the project. We added a wardrobe stylist and a producer, both of whom would travel with the team. Considering the addition of a producer, we decided to forgo the pre-pro days for the photographer and assign the logistical tasks to the producer. Additionally, a digital tech was requested, which we added as well. Instead of hiring another person to play to role of digital tech and budgeting for their travel, we decided that the first assistant would pull double duty. That meant we had to increase their rate, as well as travel expenses, accordingly. We were also asked to break out an option for two years of usage, which I priced at 50% of the one year rate for both the photographer’s licensing fees and the talent fees. Lastly, the client requested that production insurance be included, and we based this on approximately 2% of the production expenses. At this point, we had a better understanding of the client’s budget (around 130k), which we kept in mind and were fortunately able to stay within, as well. Here was the revised estimate:

Here was the revised estimate: 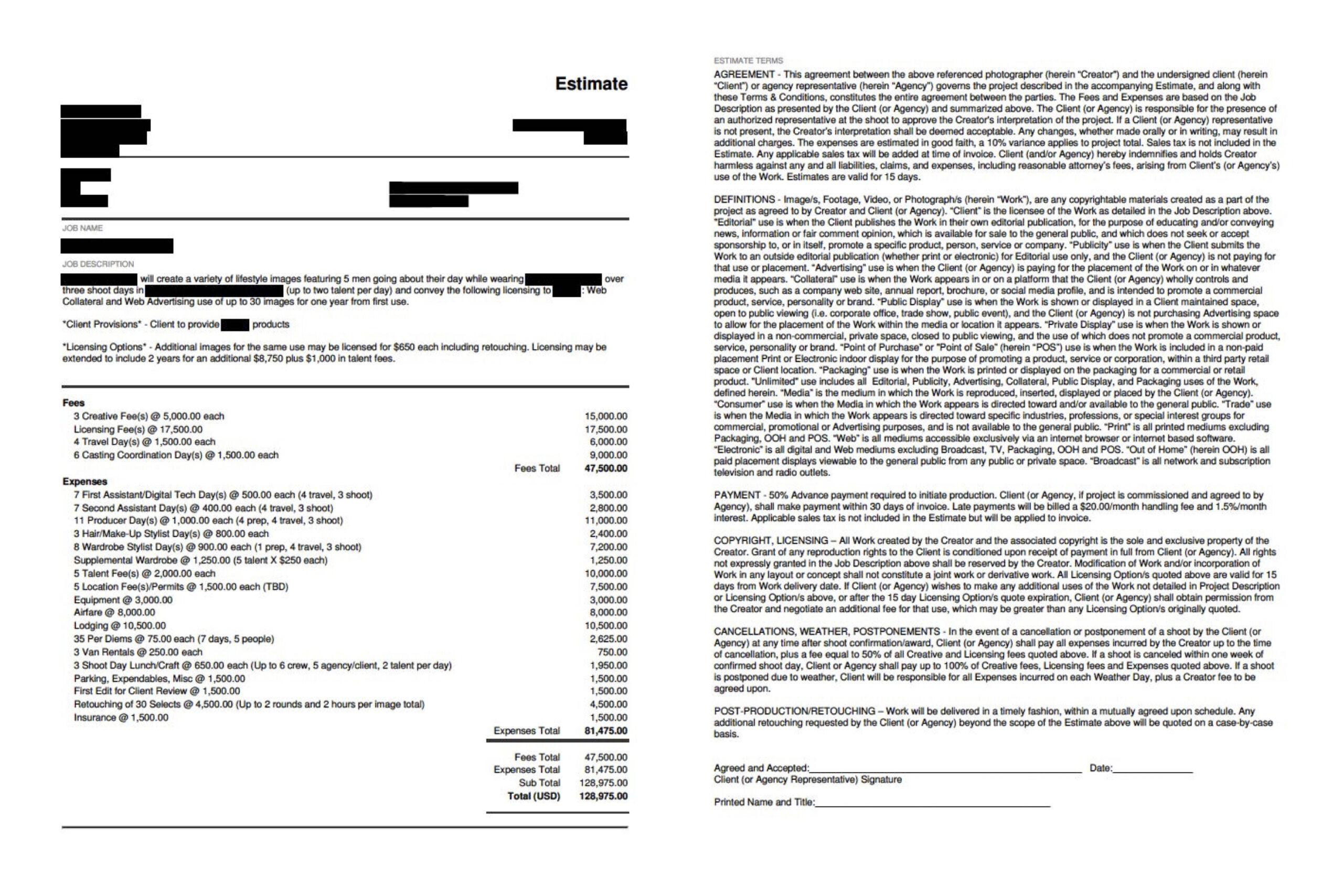