Pricing & Negotiating: Reportage For Advertising Use

Recently, an ad agency contacted one of our photographers about an estimate to shoot a series of still photographs for a campaign for a popular sporting goods manufacturer. A year earlier, the photographer had quoted on a similar project for the same agency, but the two of them couldn’t come to terms on it (the photographer wasn’t comfortable delivering extensive licensing on so many pictures for what he thought was a low fee). But his diplomacy, patience and professionalism were rewarded when the agency came back to him with another project. Knowing that the client was cost-sensitive he wanted to make every effort to deliver a reasonable proposal. But just as he knew the client’s sensitivity to price, the client knew his and came back to him anyway. They were interested in the photographer not just because of his style of shooting, but also because of his post-processing technique.

The shoot was to take place on one day at a factory half-way across the country. The project required making portraits and candid photos of employees at work, as well as still life pictures of the final product. The shoot would require only minimal pre-production. All of the elements in the pictures (the people, the location, the props) were already in place, and the photographer’s (mostly) ambient light style of shooting would allow him to get his pictures with minimal equipment or disruption to the operation.

The photographer had gotten the initial details from the agency (including a shot list) and then asked me to talk to them. After reviewing the concept and approach with the photographer, I prepared a list of questions for the art buyer:

With all that in mind, I got to work on the first version of the estimate.

While the licensing was pretty extensive, there were limitations to consider. The print ad use was limited to sport publications and it was unlikely the agency would be using all 18 images in ads simultaneously. To determine the fee, we looked at the number of situations outlined in the shot list, rather than the actual number of shots. The images within a situation amounted to a hero shot and variety of detail shots.  Based on the number of situations (4), licensing, style and sophistication of the production, we decided to set the fee for the first situation at 9000.00 and each additional situation at 3000.00. We checked our pricing against a few other sources. BlinkBid’s bid consultant suggested a range of 5950.00-8500.00 per image per year, which is a great starting point. Corbis was in the same ballpark, 8500.00 per image per year and FotoQuote was slightly lower at about 5000.00-6500.00. What these pricing calculators can’t take into account are the sophistication of the production, similarities between the images or caliber of the client/product/agency.

Since the shoot was going to be pretty low-tech, the photographer decided to just have one assistant and to have him look after the photo equipment as well as manage the digital files. The photographer and the client were comfortable reviewing images on the fly in order to keep moving quickly (mostly seeing them on the back of the camera with a few breaks during the day to see them on a laptop). Against my better judgement, I went along with the idea of one assistant. For the small additional cost, I think it’s worth having a second assistant on just about any shoot. And when working out of town, I’ll normally book a local second assistant who will know where to go when the photographer needs something in a pinch.

For most editorial and corporate shoots, I charge a capture fee for each shoot day (which pays for the time to create and post a web gallery) plus either a file prep fee (when the processing is straight-forward) or a retouching fee (when it’s more elaborate). For most advertising projects, it makes sense to have a digital tech on hand to help the client view the pictures as they’re being made as well as organize, rename and run any galleries necessary. But we chose the run-and-gun approach for this shoot.

The treatment the photographer gives to his final images is somewhat unique and time consuming, so we billed accordingly.

Since the locations (and the action at each location) were fixed, the scouting would be relatively brief. We decided it could be combined with the travel day. The photographer would need to figure out where he was going to stage his equipment and review all the areas on the shot list. This allowed me to bundle the scouting with the travel day. The photographer planned to fly in the day before the shoot, scout that afternoon, shoot the next day, and return home the following morning.

I estimated for airfare for the photographer and his assistant. Since they wouldn’t have to bring a lot of gear, we only had to account for 2 checked bags each way per person @ 25.00 each. The tickets were 337.00 per person and baggage fees would total 100.00. I rounded up a dollar and made it a point to remind the art buyer that this fee would increase the closer we got to the shoot, so making a decision sooner rather than later was most cost-effective.

We looked up rates for a two-day SUV rental. Enterprise had cars available for about 100.00/day. I also included the full insurance coverage at 20.00/day and 40.00 in gas to refill the tank.

The photographer and assistant would each have their own room for two nights. I found rooms at a Residence Inn for 120.00 per room per night, including taxes.

We estimated catering for 8, including the photographer, his assistant and 6 others from the agency and  client. We typically estimate 35.00 per person for a light breakfast, normal lunch and snacks throughout the day.

This item covers miles the photographer has to drive to the airport from his home/studio, any parking, tolls, meals that he pays for on the travel or shoot days (excluding catering), and any miscellaneous expenses that may pop up at the last minute.

We wanted to make sure that we clearly stated what the agency and client will be providing if the photographer wasn’t providing it. Every necessary component of a shoot should be addressed in the estimate.

We normally ask for 50% of the estimated costs so that the photographer can pay their vendors in a timely fashion and buy/rent what they need for the shoot. Some agencies have rules about paying out a certain percentage of the expenses and a certain percentage of the fee, which we are usually fine with as long as the photographer has enough to cover out-of-pocket expenses. 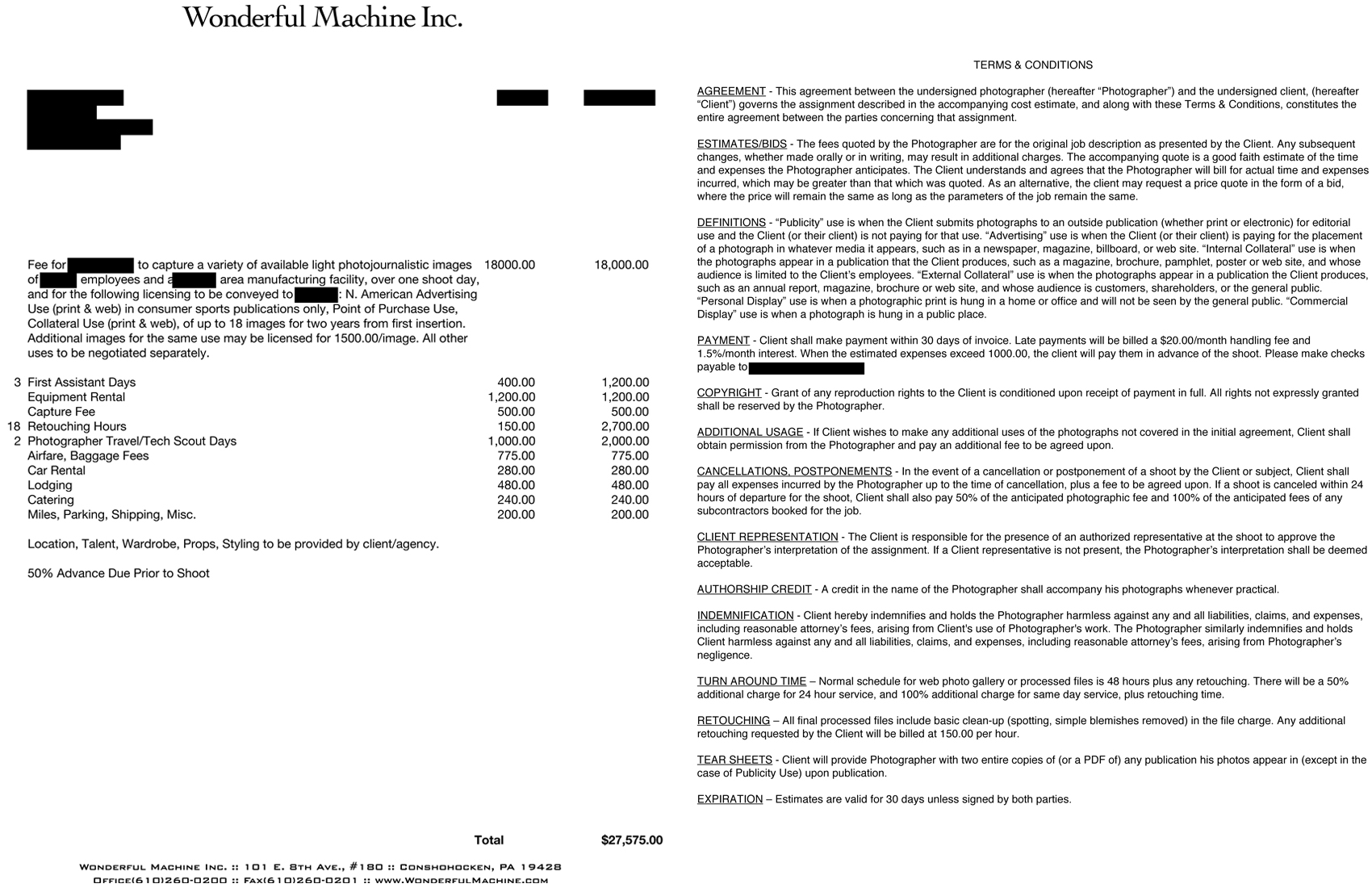 The art buyer ran it by her colleagues as well as the client and got back to me the next day. Not surprisingly, a budget had materialized. She told me that they would like to keep the estimate below 25k because it’s their policy that if an estimate exceeds that amount, they’re obligated to consider three vendors and run the estimate through a cost consultant. This is not the first time I’d heard about the “keep it under 25k rule.” So the give and take began. The art buyer ran the second estimate by her colleagues and the client. Now they decided that they wanted 20 images from the shoot (two more than initially requested). So we bumped the fee up accordingly and resubmitted the estimate.

Here is the third and final estimate we sent to the agency, which the client approved. Apparently, the AB can skirt the cost consultants by issuing 2 POs if the estimate comes in just over 25k. Click to enlarge: 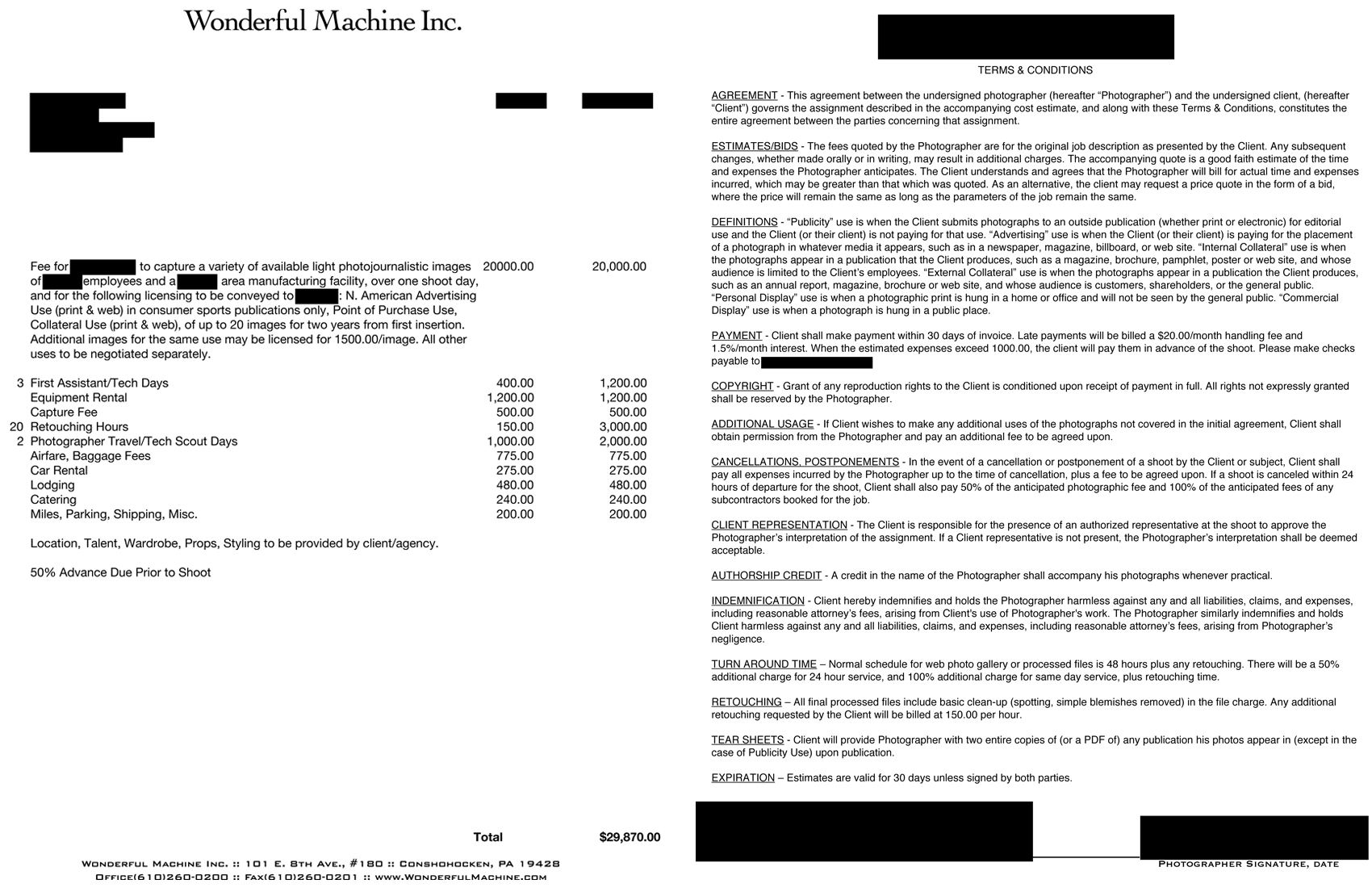 About a month after the shoot, the agency contacted the photographer and asked to license an additional image from the shoot to be used in a single spot on television as well as online for up to one year. We gave them a price of 3000.00 and they agreed.