James Harden, shooting guard for the Houston Rockets, is having a season that is unparalleled by many in the game. His 2014-15 regular season stats have him averaging out at 27.4 points per game, and he’s trailing just behind John Wall (WSH) for most assists in the NBA, at 7.8 per game. Another thing about Harden that’s unparalleled by others in the NBA? His glorious, ZZ Top-worthy beard. Harden’s fantastic facial hair is just one of the reasons that Houston commercial photographer Robert Seale has been dreaming about shooting his portrait for a long time.

A few months ago, Robert got the call he’s been waiting for from Sports Illustrated—to photograph James Harden for the cover. The catch? With Harden’s tight schedule, SI’s editor asked if Robert could put together something with the iconic Houston skyline … with only about 24-hours notice. Needless to say, Robert knocked it out of the park. Check out the final shots, which appeared in the February 23 issue of SI, below:

Robert’s knowledge and experience shooting in Houston was invaluable for the shoot, especially since he had to secure a skyline location in less than a day.

I suggested a view from the traditional western side … there are great spots along Allen Parkway and Memorial Drive where the buildings separate and line up well. Yes, it’s been done, but it really is a great angle. (Sidebar: I may sound like a homer, but Houston’s western skyline is among the best I’ve seen in the world—right up there with Dallas, Chicago, Shanghai and Doha in the manner that the skyscrapers line up and separate in a photograph. It’s the result of a late ’70s—early ’80s skyscraper building boom that hasn’t been matched in the US since.)

After chatting with the editor and securing a location on top of a parking garage just north of where he had initially suggested, Robert contacted his Plexiglas shop and overnighted a sheet from Dallas. Robert then called up GCG Productions, a stage company he used years ago for a similar fashion shoot, to get a stage built to hold the Plexiglas (and James Harden). Lastly, Robert booked assistants Travis Scheibel and Michael Klein, and he was good to go.

After all that scrambling to get ready in record time, the weather took a turn for the worse, and the shoot was moved to Saturday (on the Rockets suggestion, no less!). Actually, it was a good thing … I knew that our first window on Thursday would be cloudy and our chances were looking much better for good weather on Saturday. The shot wouldn’t really work on a totally cloudy evening. We had to then rebook everyone for the Saturday evening shoot …. fortunately the stars aligned, everyone was available, and the location was still ours.

When shoot day came, Robert and his team set-up a few hours early to test and get the lighting just right. Robert said “timing was critical—we only had 20 minutes with Harden to get both shots, and predicting the cool after sunset glow on buildings is not an exact science.” Robert gave the Plexiglas shot an 11 minute window, and awaited Harden’s arrival.

After watching cloud cover all day, we were lucky and the clouds parted just an hour before sunset for a fabulous magenta purple afterglow. The magazine repro’d a bit on the blue side, but that’s printing. SI art director Chris Hercik did us proud again with a nice classy layout for the cover and spread. 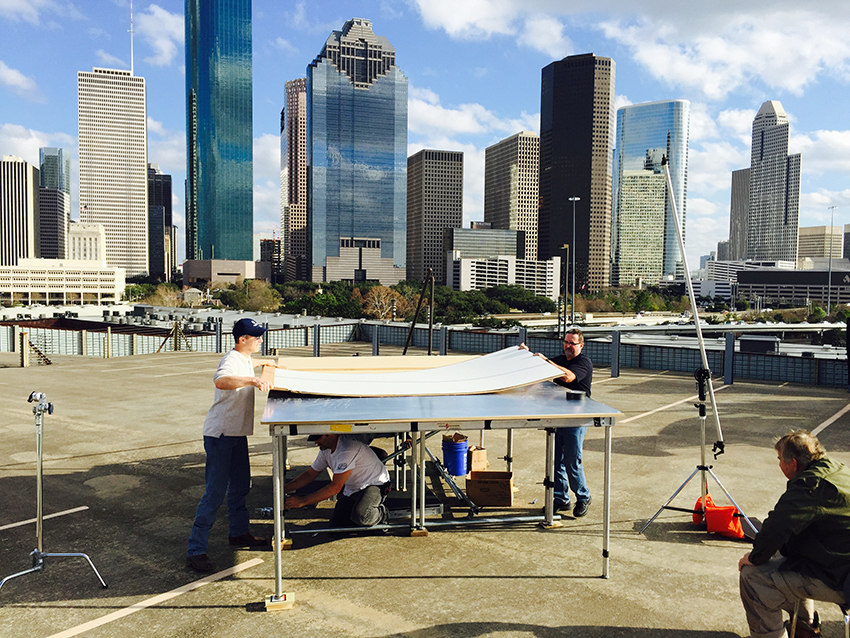 Robert’s crew setting up the Plexiglas stage on the rooftop parking garage. 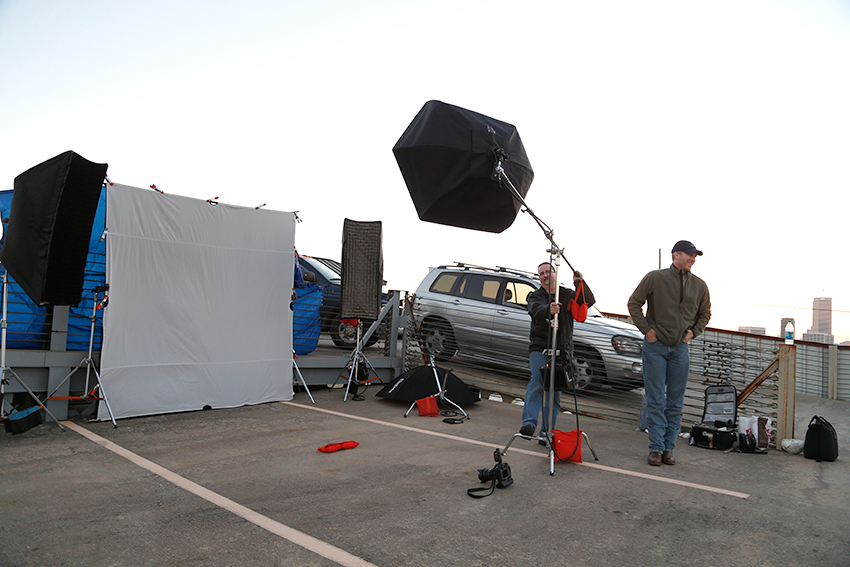 A simple Scrimjim backdrop with windbreak to keep it secure on the roof for the close-up portrait. 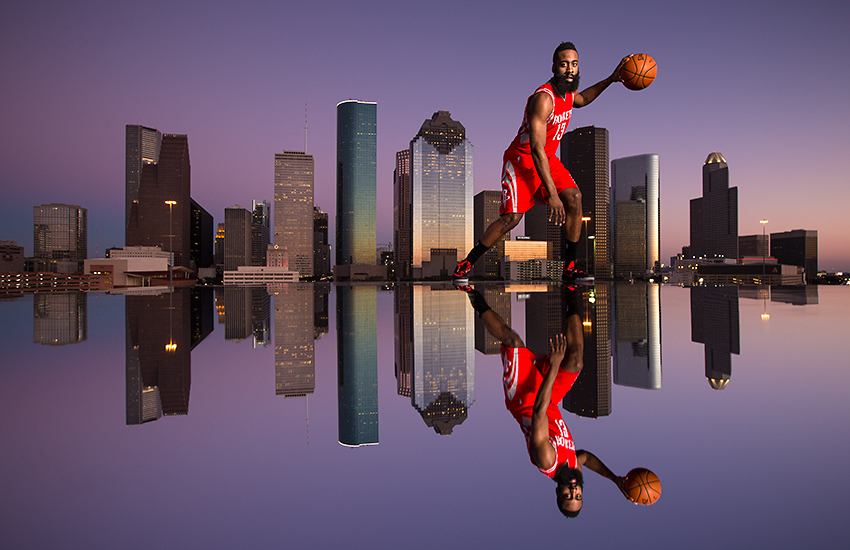 To see more of Robert’s work, visit robertseale.com, and read Robert’s full post about the shoot on his blog.

Let us help you Find Photographers, source Stock Photography,
Produce Your Shoot, or just reach out to hear more!