Scanderbeg Sauer is a Zurich/Munich-based photographic duo comprised of Andreana Scanderbeg and Alexander Sauer. Renowned for their clear-eyed, fine art aesthetic, the pair has carved out their own niche in the world of modern industrial photography.  Having traveled to a variety of industrial facilities and areas around the world, the duo makes pictures of machines and facilities with the same precision with which they were engineered. Not one pipe or piston out of place.

After dabbling in economics and later working as a photo assistant, Alexander decided to study photography full-time in the mid-nineties. He found inspiration from the contemplative approach of Dusseldorf School photographers like Bernd & Hilla Becher and Thomas Struth. Originally from Los Angeles, Andreana met Alex when she was working in a senior management position for a large corporate group. By 2005, they began working together in an official capacity, and Scanderbeg Sauer was born.

Early in their career, the pair were commissioned to shoot an annual report for a German logistics company. They traveled all over the world, photographing countless harbors, airports, and warehouses. Photographing these places piqued the pair’s interest in industrial photography, and they ended up being hired for that annual report for the next seven years, solidifying their place in the industry.

One of the team’s primary guiding principles is to always create exquisite pictures even when the subject seems chaotic or unappealing. To do this, they employ formal rigor, often reducing complex machines into geometric patterns.

Most people don’t think about industrial photography as being sexy, but we think that there’s a lot of beauty in complexity.

Together the team is fascinated by the details that emerge when one carefully examines industrial processes. Part of the reason they’re so good at what they do is that they’re so interested in the inner workings of the industry, and all that comes with it, the slick and glossy, as well as the messy. They pride themselves on being eager to dive into situations that might give other photographers pause.

If it is dark, dirty, dangerous and possibly radioactive, you just might find us there!

After more than ten years as a unit, they decided it was time to give the face of Scanderbeg Sauer a refresh. They wanted a branding overhaul to match their finely-tuned aesthetic approach that had become increasingly coherent over the years.

Our appearance as a brand has become more self-confident, consistent and recognizable, so we wanted our marketing materials to reflect that.

In need of professional assistance, Scanderbeg Sauer settled on Munich-based Keller Maurer Design because of the firm’s meticulous attention to detail and reputation for creativity. The first order of business was to streamline their website to emphasize quality over quantity. They greatly reduced the number of pictures and condensed their news section to strictly social media content. The result is a minimalist gallery, carefully curated and deliberate, so it’s more reminiscent of a fine art project showcase than a commercial photography site. Scanderbeg Sauer’s choice to integrate their personal work with their commercial further contributed to this unified look.

In conjunction with the launch of their new website, the team worked with their designers to create a special print promotion entitled, ON LOCATION. The idea for this promo was to target agencies and magazines, both new and existing clients, to show off their new look. Selecting the images for the piece required a continuous back and forth process between the duo and the designers which made for an exciting and inspiring collaboration. Although it was challenging, Scanderbeg Sauer enjoyed the challenge of looking at their work with fresh eyes.

We were praised for many things and criticized for others. It was an intense and exciting process. We loved that the mirror was held up to us. It’s so important to hear external viewpoints. To listen. We are constantly striving to improve, and we have learned so much – also about ourselves.

The resulting magazine ended up being 32 pages, showing a selection of Scanderbeg Sauer’s projects along with some behind the scenes info. The photographs are elegantly displayed incorporating the occasional full-bleed design and explanatory text. The magazine was offset printed, giving the images a high level of detail and color accuracy. Scanderbeg Sauer also elected to use both glossy and matte paper throughout ON LOCATION, giving the magazine varying  “optic and haptic qualities.” The resulting magazine looks more like a fine art publication than a commercial photography promo. 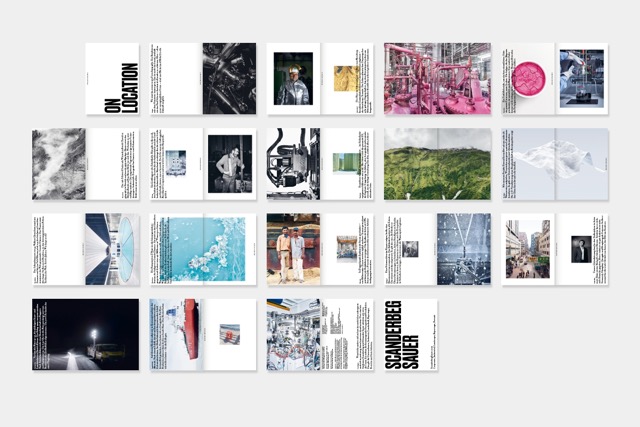 From now on, Scanderbeg Sauer intends to send out a special print promo annually, and are currently in the midst of preparing a follow-up promo. They are also in the process of redesigning their print portfolio in between the new business they’ve already generated through ON LOCATION.

See more of Scanderbeg at scanderbegsauer.com

Let us help you Find Photographers, source Stock Photography,
and Produce Your Shoot — or just reach out to hear more!