We recently worked with GTB to coordinate six different productions for a social media campaign they were developing. The goal was to connect Ford with local audiences through Facebook by showcasing the new Ford Fusion in front of local landmarks that would resonate well with consumers in six cities across the country. Working closely with dealerships in each city to provide the vehicles while relying on the photographers to weigh in on local landmarks, we scouted, permitted, photographed and delivered a wide range of assets in six different cities on a fast paced schedule. 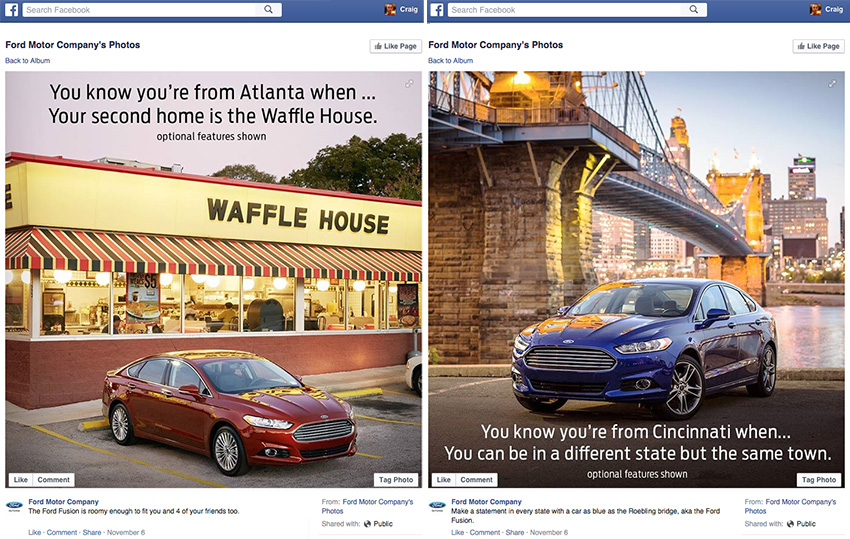 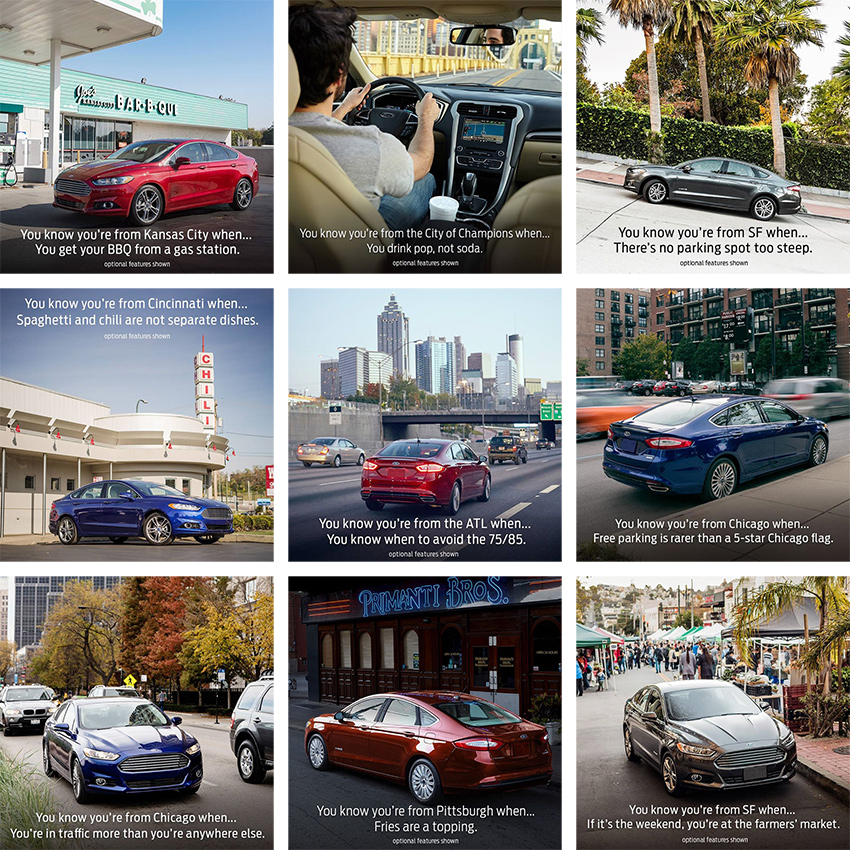 I recently had the pleasure of working with GTB to coordinate a production for a social media campaign they were developing. The goal was to connect the brand with local audiences through Facebook by showcasing the new Ford Fusion in front of local landmarks that would resonate well with consumers in multiple cities around the country. Their tagline was “You know you’re from ______, when _______ “, and the plan was to develop copy that went along with each location and each city.

Before the specific locations and concepts were solidified, we first needed to find appropriate photographers in the six cities they wanted to target which included Atlanta, Pittsburgh, Cincinnati, Kansas City, San Francisco, and Chicago. While experience shooting automotive projects was a plus, I helped GTB narrow down a list of photographers who specialized in travel and lifestyle work as they hoped for the final images to be less “polished car shoot”, and more “real-world user-generated content”. Ultimately, we brought on board Greg Miller, Jonathan Willis, Steve Puppe, Tai Power Seeff, Tim Klein, and Janelle Bendycki, each of which was super collaborative and really amazing to work with.

Once we had our photographers lined up, I set up conference calls with each of them not only to review the creative brief with the agency but to bounce the agency’s concepts off of each photographer to double-check that they would resonate with people in each city. Some concepts were right on track, while others were tweaked a bit based on each photographer’s feedback. In the end, we had two concepts for each city ranging from a focus on hilly streets and farmers markets in San Francisco to Waffle House restaurants and confusing highway intersections in Atlanta.

While some of the concepts were straightforward, others required a bit more planning. For instance, in addition to some pre-scouting by Tai Power Seef in San Francisco to find dramatically hilly streets, we needed to work with the local film office to secure permits and partially block a parking spot on the street to guarantee the space would be there on the shoot day. While the permitting process was straightforward, we had a very tight timeline to pull the pieces together.

Permitting was less of an issue in most of the other cities, but separate hurdles needed to be jumped over to acquire clearance from local restaurants to have the vehicles photographed in front of their buildings and signage. Fortunately, with a few solid leads from our photographers (who happened to have previously shot projects for the specific restaurants we wanted to work with), and a bit of organic research along with an offer for some free publicity, we were able to collaborate with Waffle House in Atlanta, Primanti Bros. in Pittsburgh, Camp Washington Chili in Cincinnati, and Joe’s Kansas City Bar-B-Que.

With the generous help of GTB to assist in making connections with local dealerships, we were able to dial-in vehicle pickup and drop-off and complete all of the shoots within one busy week. In the end, individual shots from each of the twelve concepts were chosen and posted first to Ford’s Facebook page, and then to their Instagram page.